Escovedo vs. Vargas at Tachi Palace Fights May 6th 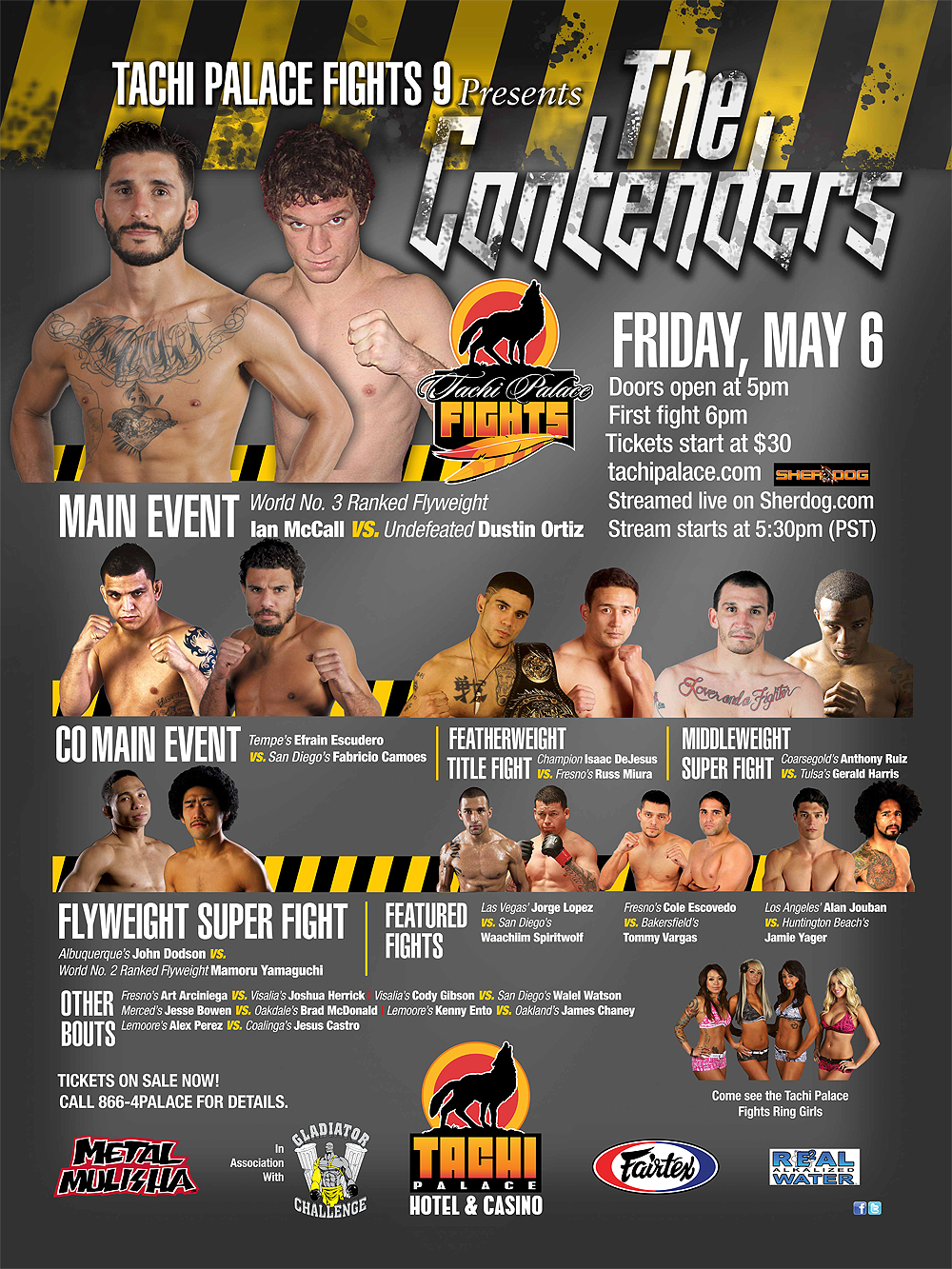 Lemoore, Calif. – There’s a fire burning in Cole Escovedo’s stomach like never before.

And the Fresno mixed martial artist looks to raise his stock and have the UFC bosses once again take notice. In March of 2010 it looked like Escovedo (17-6) was well on his way back to the WEC, where he once reigned as champion, following a thrilling knockout of Yoshiro Maeda (28-9-2) in Dream.

But when the call didn’t come, Escovedo defended his Tachi Palace Fights bantamweight strap against rising star Michael McDonald (12-1), who derailed Escovedo’s WEC dreams with a second knockout and inked a Zuffa deal in the following months.

Escovedo followed with a return trip to Japan where Michihiro Omigawa (12-9-1) earned a second-round submission victory over Escovedo.

Since Escovedo has returned to the win column with a triangle victory over another rising prospect Steve Siler (18-9) and will look to make it two in a row on May 6th at the Tachi Palace Hotel and Casino against Bakersfield, Calif.’s Tommy Vargas (7-1).

“I haven’t changed too much up. It’s a normal training camp for me. The one thing, though, that I have done is put a little more emphasis on some strength, not your typical strength and conditioning, but more like grip strength and muscle endurance that’s used when grappling and fighting,” said Escovedo, who can cement his name as a top contender for the vacant Tachi Palace Fights bantamweight crown with a victory.

Vargas, though, is a worthy opponent training now full time out of Millennia in Rancho Cucamonga, Calif. with TPF Flyweight champ Darrell Montague and company.

“I know that Cole has a very good ground game, but I do have a strategy for that,” said Vargas, who made his promotional debut in December 2010 with a decision victory over Martin Sandoval (6-3).

“I’m really not impressed with his takedowns. He kind of just tries to pull you to the ground and even if the fight goes there I really can’t see him tapping me. I don’t get tapped often in the gym and I have some of the best workout partners.”

Escovedo knows what to expect from Vargas, though, too.

“He is a legit wrestler. I’m sure he will try to get a takedown and ride me out, but I could be wrong,” Escovedo said. “I know I will have a good reach on him and I will use that to my advantage. I really can’t commit to moving forward, because that’s where he will get that easy takedown. I will take the center of the cage, though, and make him adjust and frustrate him.”

Tickets can be purchased at www.tachipalace.com or charge by phone at 1-800-225-2277. Tickets may also be purchased at the Tachi Palace Gift Shop and start at a low price of just $30 for general admission seating.

The main event features a flyweight bout between San Clemente, Calif.’s Ian McCall (9-2) and Franklin, Tenn.’s Dustin Ortiz (7-0). McCall is coming off a decision victory over the previously ranked No. 1 flyweight in the world, Brazil’s Jussier da Silva (9-1) which moved him into the Top 10 rankings at No. 3.

Meanwhile, Ortiz is a Strikeforce veteran and a proven finisher, winning all of his bouts by stoppage.

San Diego, Calif. lightweight Fabricio Camoes (11-5-1) makes his return to Lemoore after his TKO victory over Las Vegas, Nev.’s Steve Lopez (12-4) in February to face Tempe, Ariz.’s Efrain Escudero (15-2) in the co-main event. Like Camoes, Escudero is a UFC veteran and is riding a 2-fight win streak.

Two other feature fights include UFC veteran Gerald Harris and the World’s No. 2 ranked Flyweight Mamoru Yamaguchi in separate bouts.

The Tulsa, Okla. middleweight, Harris (17-4), has lost two straight bouts and the UFC vet is looking to bounce back against local veteran Coarsegold, Calif.’s Anthony Ruiz (25-15).

Japan’s Yamaguchi (25-5-3) brings his exciting style to the US for just the second time and will take on one of the nation’s most exciting flyweights in Albuquerque, N.M.’s John Dodson (11-5).