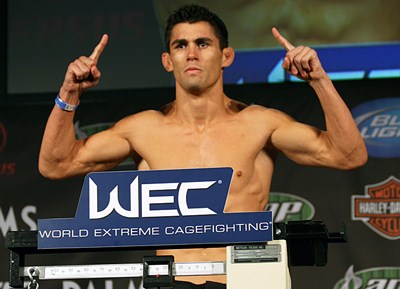 During the mixed martial arts hour on Wednesday’s episode of AFTERNOON PRESS BOX on Sports Radio 560 WNSR, Darren and the boys talked with UFC bantamweight champion Dominick Cruz (17-1), who has a title defense bout coming up on July 2 against the only person to ever defeat him, Urijah Faber.

Cruz talks about how his game has changed since their first fight, he calls Faber a “hater” and says he thinks it gets under Faber’s skin to see him winning at all. Cruz says for the first time in his career he has some emotion going into this fight and Faber is going to get the “very best Dominick Cruz” on July 2.

In addition to talking with Cruz, the guys look back at last weekend’s UFC Fight Night 24 event and discuss Phil Davis‘ performance against “Lil Nog” in the main event (Davis was a guest on last week’s show). The guys compare the evolution of Davis’ career with the evolution of Jon Jones and discuss a potential future match-up between the two. TUF 13 is also discussed.