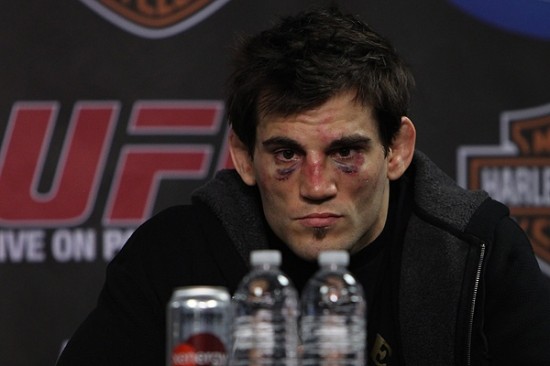 American Kickboxing Academy’s Jon Fitch has had to withdraw from his rematch against B.J. Penn which was scheduled for July 2 at UFC 132 in Las Vegas.

ProMMAnow.com has since confirmed the news and received word from AKA head coach Javier Mendez that Fitch suffered a shoulder injury and will try rehab first before considering surgery.

Evidently the injury was serious enough that Fitch had to pull out of the bout a full three months early.

Fitch and Penn battled to a majority draw in their first fight which took place back in February at UFC 127 in Sydney, Australia. It was Penn’s second fight back at welterweight after knocking out Matt Hughes in in the first round at UFC 123 in November.

Fitch only has one loss on his UFC record, a unanimous decision defeat to welterweight champion Georges St-Pierre for the title at UFC 87 in Aug. 2008.

Fitch has been working his way toward another title shot ever since the loss and a win over Penn could have possibly earned him that spot.

UFC 132 is also expected to feature a bantamweight title fight between champion Dominick Cruz and Urijah Faber and a light heavyweight match-up between Tito Ortiz and Ryan Bader.

A replacement for Fitch has not yet been named. Stay tuned as more details become available.

UPDATE: 7:52 p.m. CT – ProMMAnow.com confirmed the nature of Fitch’s injury to be with his shoulder and he will try to rehab it before seeking other options.