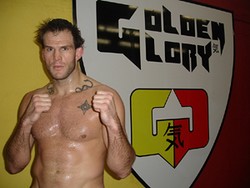 John Olaf Einemo is finally set to return to the Fight Game after a long, life threatening battle with health and he is not wasting any time.  At UFC 131 in Vancouver on June 11, the Norwegian will face off against #5 ranked Heavyweight Shane Carwin.  John Olaf Who?, you may be asking yourself and why is the UFC throwing him to the wolves??  Its the UFC and Mr. Carwin that should be on check.  Einemo internationally known for his grappling prowess and also known as the only man ever to beat famed Brazilian Jiu Jitsu ace Roger Gracie at the ADCC in Abu Dhabi.

Once signed with the UFC and asked whom he would like to fight, the 6’6″ Norge scoffed “I will fight anyone, any time, No problem, eh?” also commented he wanted to fight the best and not wait around, if they want him to fight Cain Velasquez, he smiled and said “bring it on”.  Knowing the UFC brass wouldn’t throw him into a title fight, Einemo turned his attention to the next best ranked fighter available (with Lesnar and JDS tied up in TUF) #5 ranked Shane Carwin.  Instantly signing his contract and calling out Carwin, Einemo awaited patiently for Carwin’s team to sign, and now “it’s on”…

Einemo and his entire Camp confidently let it be known that this fight is only the beginning of “The Animal” Einemo making up for lost time.  Spending over 3 years sparring and improving his stand up with Golden Glory the most devastating striking camp in the game, added with his other worldly grappling skills; trust me when I tell you, do not sleep on Einemo.  His sparring partners and camp don’t know a training speed, they all train all the time and fight in training like its a fight.  That’s how you win 5 of the last 6 K-1 world Grand Prix’ and revolutionize the Fight Game.

With the likes of Strikeforce, Dream, K-1 world champion Alistair Overeem, Sergei Kharitonov, Semmy Schilt, Gokhan Saki pounding on each other every day; Einemo, those mentioned and the other stars not mentioned will all be a force from here on out.