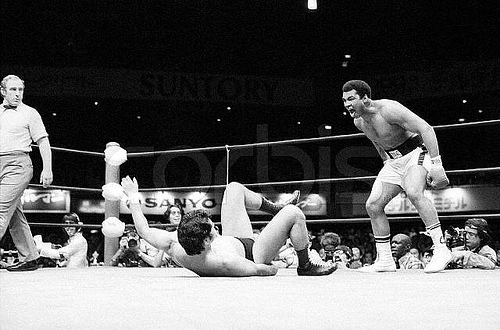 Yesterday was the 40th anniversary of Ali vs. Frazier I, which has been dubbed “The Fight of the Century.” ESPN rolled out Bert Sugar and had him discuss the fight. Muhammed Ali’s fight with Antonio Inoki certainly does not compare. It might not even be a fight. However, as MMA fans it is important to remember how big the event really was back in 1976, a full 17 years before UFC 1.

John Saar really said it best. In his article “Ali-Inoki Fighting for Ripoff Title,” he said, “any self-respecting crowd of ancient Romans would have had Muhammad Ali and Antonio Inoki put to the sword for their lamentable burlesque of a fight in Tokyo’s Budokan Hall.”

In 1976, Bob Arum and his Top Rank promotion company put together a match between heavyweight boxing champion Muhammad Ali and professional wrestler Antonio Inoki. Most in the media considered the bout a joke or stunt, much like another Top Rank promotion, Evel Knievel jumping the Snake River Canyon.

Due to an odd amalgamation of rules, the bout was a tediously boring set of 15 rounds. Inoki kept to his back and threw kicks at Ali’s legs. Ali is credited with throwing five punches and landing only one.

While the media focused on the fight’s sideshow appeal and uninspiring outcome, they failed to predict the impact of the event. The boxer versus wrestler match up increased the popularity of shoot wrestling, or legitimate professional wrestling, in Japan. The concept of style against style was revisited in the U.S. with the creation of the UFC. Today MMA is a quickly rising sport in both countries.

On Oct. 1, 1975, Ali defeated Joe Frazier for the second time. Prominent boxing historians consider the “Thrilla in Manilla” to be Ali’s last great performance. Following that night, Ali was still tremendously popular and continued to compete. He needed a safe bout that was still interesting to fans. In an article for the Washington Post called “Ali Needs Quick Kayo in Japan” Dave Brady said, “[Ali] is at such a low point in his career after his near disaster against a feather-dusting Jimmy Young, whom he outpointed at Capital Centre.”

Inoki was already a star in Japan. His friend Karl Gotch, a Belgian holocaust survivor, schooled him in catch wrestling. In contrasts with the today’s wacky world of professional wrestling, Inoki’s style was based on realistic maneuvers. His “strong style” inspired him to challenge champions of other disciplines. Inoki faced Olympic judo gold medalist Willem Ruska, Kyokushin Karate champion Willie Williams and of course boxing’s Ali.

The fight’s promoters pulled out all the stops in creating the spectacle. Since the contest was to take place in Tokyo, they organized closed circuit viewing in the U.S. Gerald Eskenazi described the Shea Stadium set up for the New York Times, “the giant 24-foot-by-32-foot TV screens at Shea will be set up at first, second and third bases. The live bouts will be staged in a ring between the pitcher’s mound and home plate.”

The live bouts in New York were mostly professional wrestling match ups. However, the penultimate bout was between boxer Chuck Wepner and Andre the Giant. Wepner, who is most well known for inspiring Sylvester Stallone’s Rocky series, was tossed from the ring early in a match that is widely considered a staged contest.

Ali, as always, played his part in creating intrigue. An AP report published in the Chicago Tribune quotes the champion calling Inoki “the pelican” due to his large chin. Another line attributed to Ali, “If I ain’t afraid of walkin’ down a back alley in Harlem, I ain’t afraid of you.” In response Inoki quipped, through a translator, “I will nullify Ali in return for the words from his mouth.”

In a 2005 article by Aaron Tallent on TheSweetScience.com, Ali’s fight doctor, Ferdie Pacheco is quoted as saying their thought process was, “It’s going to be orchestrated. It’s going to be a lot of fun and it’s just a joke.’ And when we got over there, we found out no one was laughing.” This realization led Ali’s camp to debate the rules. The final rules excluded suplexes, head-butts, openhanded strikes and kicks above the waist.

Contemporary articles leave out this last minute change, and instead vaguely describe the rules. A report in The New York Times says that “[the] boxing contestant must observe all customary boxing rules while in a standing position. Plus, he may continue to throw punches when and if he winds up on the canvas.” The instructions for Inoki read, “[the] wrestling contestant must observe all customary wrestling rules while in a stand or kneeling position, but cannot punch while on the canvas.”

The fight itself is at times painful to watch. Inoki spent most of the match on his back kicking at Ali’s legs. For the most part Ali danced around his down opponent. He tried to goad Inoki into a stand up fight with taunts, but the wrestler stayed true to his strategy.

After what Saar described as “45 minutes of alleged fighting [that] included taunts, kicks, arguments but almost no physical action” the judges declared the contest a draw. Fans in Tokyo hurled garbage into the ring, and fans in New York left dissatisfied

In the end, Inoki’s kicks proved damaging, although in an unintentional way. The tips of his bootlaces cut into the shins of Ali and caused an infection and blood clots. Don Pierson wrote in the Chicago Tribune that the blood clots were “superficial.” However, Pacheco said, “Ali was still feeling the effects of the leg injury” months later when he fought Ken Norton for the third time. According to the doctor, Ali’s mobility was never the same.

Headlines read that the bout was a “farce,” “ripoff” and “nonfight.”

Columnists thought it only happened due to Ali’s star power and audacity. Joan Ryan, in her article “Down was Up in the Ali-Inoki Farce” for The Washington Post, wrote, “Ali’s legions will [continue] to attend to applaud the antics of this muscled child-man. You will recall one that failed to materialize – Ali vs. Wilt (The Stilt) Chamberlain.” She continued, “now rumors are pinging through the sports world that Ali’s camp is trying to talk Billie Jean King out of semiretirement for a sort of ‘Lady and the Tiger’ showdown at center court.”

Rick Talley, a columnist for the Chicago Tribune, said that he was interested in the match up, but only because “it’s so ridiculous.” He said, “I’ll view it on closed-circuit TV. I would also go to see Houston McTear try to outsprint Bold Forbes, linebacker Doug Buffone recite poetry about Timbukto, Northwestern play football against Ohio State, and Cubs pitchers try to throw strikers past the Cincinnati Reds.”

Lost in the obvious shortcomings of the fight is the fact that there was serious fan interest in bout the U.S. and Japan. The mixed match up, that was considered a joke by the media, brought out the fans. The Budokan area in Tokyo was sold out. Fans flocked to stadiums around the U.S. to watch it on large television screens. People wanted to see a combat sport that was not restricted by specific styles. It took around 30 years, but now someone has finally capitalized on that interest.

Today, the UFC, MMA’s leading promoter, is one of the fastest growing brands in American sports. In 2008, seven of the top 10 highest selling pay per view broadcasts were UFC events. Boxing was only able to place two events in the top ten. UFC 100 in July sold 1.72 million pay per views at $49.95 a piece.

Sports pundits continue to wonder how MMA has become popular overnight. However, in reality fans were yearning for such a sport in 1976.