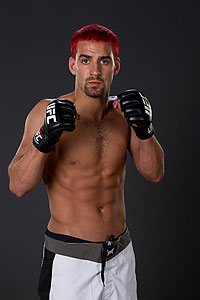 The Ultimate Fighter 12 cast member Jeff Lentz (6-1) will return to action on March 4 in the American Fighting Organization main event in Mansfield, Mass., against local standout Saul Almeida (7-1) for the promotion’s featherweight championship.

AFO announced the match-up in a Feb. 22 press release.

Lentz, who trains under UFC fighter Kurt Pellegrino, lost a decision in his last fight in November 2009 against WEC veteran Anthony Morrison. Prior to that, he won six other bouts during that calendar year, including victories over Dustin Pague (9-4) and Renzo Gracie student Eddie Fyvie (8-4).

On TUF 12, Lentz competed at lightweight and lost via submission to Alex “Bruce Leroy” Caceres.

Almeida, who trains at the Dragons Lair Academy, is also coming off of his first professional loss.