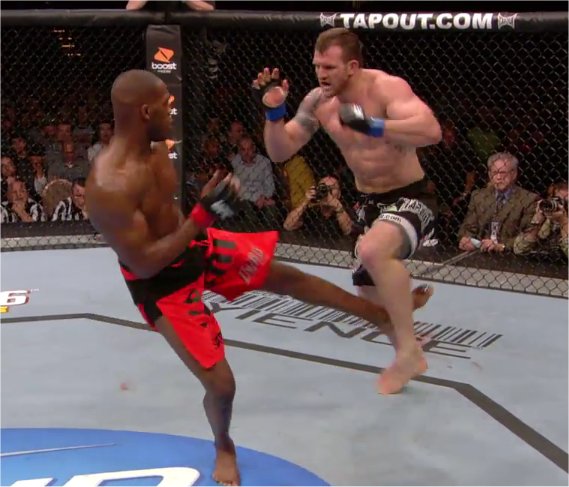 Anderson Silva cemented his place in MMA history as one of the greatest of all time, and earned his award with a stunning front-kick KO of Vitor Belfort in the first round of tonight’s main event. After a tentative start, Belfort was just starting to get his timing down when he ate a flush front-kick to the jaw that dropped him where he stood.

Jones secured a tight guillotine that ended the night of Bader and gave him an extra $75,000 for “Submission of the Night.” It was a dominating and impressive performance by Jones, who thrashed Bader in all aspects of the game. In addition to the win and the bonus, Jones was also rewarded with a title shot against UFC middleweight champion Mauricio “Shogun” Rua.

Cerrone and Kelly may have been relegated to preliminary card status, but that didn’t stop them from engaging in what would end up as “Fight of the Night.” Cerrone dominated the action after a slow start, and once the fight hit the ground, he locked up a body triangle from the back of Kelly, then followed up with a rear naked choke that forced Kelly to tap.