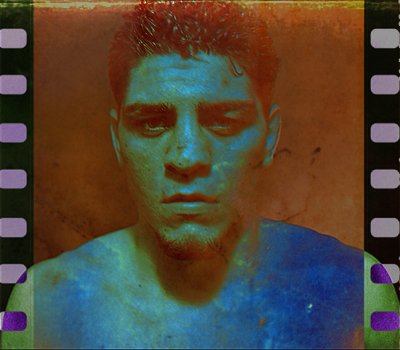 SAN JOSE, Calif. – It was a night of exciting finishes, but not one of changes, as both Nick Diaz and Ronaldo “Jacare” Souza retained their respective titles at tonight’s “Strikeforce:  Diaz vs. Cyborg” event.

In the main event, Nick Diaz and Evangelista “Cyborg” Santos battled in a fierce stand up war – and it was apparent from the bell – that the fight would not go the entire five rounds.

“Cyborg” started quickly, blistering the lead leg of the champion with stinging inside leg kicks repeatedly, in addition to landing a number of big right hands early in the first stanza.

The problem for “Cyborg” was that Diaz was walking right through even the cleanest of his strikes, and standing in the pocket through the big exchanges, delivering his own big shots.

In true Diaz fashion, the toe-to-toe action brought out the trash talking and the taunting, but despite the tough and relaxed demeanor of the champion, it was obvious that he would have to start answering the punishing leg kicks.

Diaz obliged, landing a big combo that backed up “Cyborg”, and once he was moving backward, Diaz stepped in and landed a crushing left hand that staggered the challenger.

With the brawl fully under way, both guys swung for the fences until the bell sounded on an unbelievable, action-packed opening round.

The second stanza continued where the first round left off, with both guys continuing the assault on one another. Early on it was a game of counters, as each guy looked to gain dominance on the feet, but it was “Cyborg” who decided to change strategies by going for and getting a trip take down of Diaz.

Once on the ground, Diaz wasted little time looking for a submission attempt, and quickly found one, swinging his hips and securing the right arm of Santos. The challenger looked to step around the submission, but Diaz quickly adjusted his position, softened “Cyborg” up with some punches to the body, and then extended the arm completely, forcing the tap.

“I respect the way he fights,” Diaz said. “He doesn’t mess around. He came out here and fought me. He didn’t play games.”

Robbie Lawler survived his first trip to the mat with Ronaldo “Jacare” Souza with flying colors. After Lawler was taken down as expected, he quickly worked back to his feet and and hurt Souza with a knee followed by a big left hook.

Instead of backing away and making the champion stand, Lawler followed “Jacare” to the mat, where his offense was stifled for the rest of the round, while the hurt Souza shook off the cobwebs from the big exchange.

The rest of the fight was all “Jacare.” Lawler came out in the second round with a kick, but Souza quickly closed the distance, pushed Lawler against the cage and rode him to the ground. Once there, Souza dominated the action from the top, landing big punches and transitioning from one dominant position to the next.

Souza slapped on an armbar in the closing moments of the round, but Lawler deftly defended the submission attempt and survived to see the third round.

Souza continued to apply pressure in the third stanza, by closing the distance and landing some big knees, before grabbing a single and taking the fight back into his world.

Lawler managed to get back to his feet briefly, but after a trip take down by the champion, it was the beginning of the end for Lawler.

Souza quickly took the back of Lawler on the ground, sunk in his hooks, and then locked up the body triangle before going to work on the neck of the challenger. Souza continued to work, first working across the face of Lawler, before switching his grip and securing a tight choke under the chin of Lawler.

Within seconds, the tap came, and Souza (14-2 MMA, 4-0 SF) found himself successful in his first title defense.

Herschel Walker shook off an early head kick, then screamed at Scott Carson before stepping forward and dropping him with a clipping left hand that landed behind the ear.

Once the fight hit the ground, Carson went for a leg, but ate some big shots before rolling and turtling up. Walker quickly transitioned to his back and dropped mammoth right hands to the covered up Carson.

Carson tried to make his way to his feet, only to be slammed back to the canvas, taking more punishment on the ground as Walker alternated between hammer fists, and powerful left hands to the head of Carson.

Walker gave up some space, standing over the open guard, but as Carson scooted to the cage and stood, Walker closed quickly and landed an explosive left hand that dropped his opponent and ended the night early for Scott Carson.

Roger Gracie came into the cage with plain black shorts, a reach advantage, and a world class grappling pedigree. True to his family name,  he used his superior grappling to dominate the ground action against Trevor Prangley after an uneventful couple of minutes of striking.

Prangley gave up the take down and tried to use the cage to stand, but Gracie expertly pulled his hips away from the cage before working quickly to full mount.

Prangley tried to bridge and shake Gracie, but ended up giving up his back in the process, and within a few seconds found himself tapping to a tight rear-naked choke.

“I think everything happened as planned,” Gracie said. “I knew he was heavy-handed, but I know I have the reach on my feet. So I played with the jab, and I knew he was going to come in hard. That was my plan to shoot in, and it happened exactly like that.”

Gracie moves to 4-0 overall, and 2-0 inside the Strikeforce cage with the win, and stressed that he plans to stay busy in 2011.

One thought on ““Strikeforce: Diaz vs. Cyborg” recap: Diaz armbars “Cyborg” after epic stand up war to retain title”