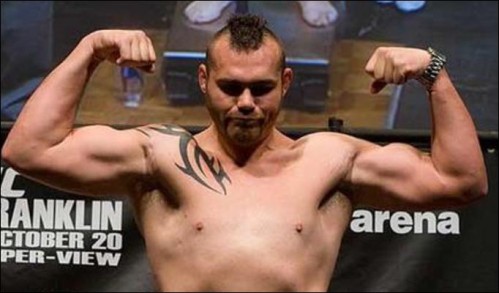 HDNet kicks off a strong UFC-free weekend with Titan FC 16. The main card features four UFC veterans trying to fight their way back into the big show. If you are wondering how I think the fights will play out, and I don’t know why you wouldn’t, here are my predictions for those fights.

Tim Sylvia vs. Abe Wagner
When Ray Mercer dropped Tim Sylvia, I think everyone knew it would be a long time before the two-time UFC champion had another fight in a big show. However, anyone in the heavyweight division above the Neil Wain level is not far from a major deal. Sylvia is still a big plodding guy who will be able to out strike enough guys to stay above water. Abe Wagner lost in the first episode on TUF 10 and is only 1-1 since the show. Look for Sylvia to land some moderately effective strikes from the outside and do most of his damage in the clinch.
Pick = Tim Sylvia

Jason High vs. Rudy Bears
Odd factoid alert. This will be Rudy Bears’ eighth-straight fight in a Kansas City. Some of the fights were in Missouri and some were in Kansas, but all were in a Kansas City. Jason High’s twitter is @KCbandit. I will go out a limb and assume they are both big Tech N9ne fans.

I would argue that High got a raw deal in the UFC. He dropped his one fight against Charlie Brenneman and then got the boot. However, my opinion might be heavily influenced by his wonderful Twitter account.

High is a solid wrestler, who has picked up the grappling game surprisingly well. Bears has served as a stepping stone for other former-wrestler prospects such as Tyron Woodley and Brent Weedman. I favor High, and I really want to see how this fight plays out. If High wants another shot in the UFC this is the type of fight he needs to win.
Pick = Jason High

Drew McFedries vs. Gary Tapasua
As always you should not expect a lot of ground game out of Drew McFedries. Though, the man sure has some power on the feet. Tapasua has won four fights in a row, but he really has not shown a penchant to take the fight to the ground. On the feet, I would put most of my chips down on McFedries.
Pick = Drew McFedries

Rich Clementi vs. Aaron Derrow
Rich Clementi is a bit of a wild card when he fights on this level. He has a solid grappling game and can hustle fighters on the ground. However, it seems as if he has not been preparing properly since the UFC released him. However, he is coming off a win over Yasubey Enomoto’s brother Felipe, so that is where my chips are going.
Pick = Rich Clementi

Earlier this week, Mann Talk took a closer look at Zuffa taking their piracy fight to the courtroom. Check it out.