We reported on Monday about an upcoming 145-pound amateur MMA fight at “Locked in the Cage VII” in Philadelphia on Feb. 11 featuring Albert Alvarez (1-0), the 20-year-old younger brother of Bellator Fighting Championships lightweight champion Eddie Alvarez.

The bout has garnered a lot of attention and the majority of the focus has understandably been on Alvarez, whose brother just happens to be one of the world’s top MMA fighters.

However, today ProMMAnow.com (www.prommanow.com) spoke with the fighter Alvarez will be locked in the cage with, 29-year-old Team Pain member, Randy Campbell (2-4-1) of Richmond, Va. We wanted to find out how Campbell feels about all the attention this fight is getting, what he thinks about people looking at him as a stepping stone, his thoughts on Alvarez and his goals in the sport. 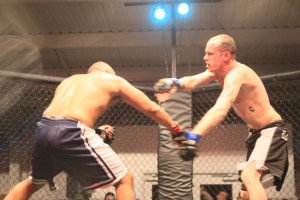 PRO MMA NOW: Hi Randy, thanks for talking to us here at ProMMAnow.com (www.prommanow.com). What is your athletic background and how long have you been fighting?

RANDY CAMPBELL: I’ve been fighting since the age of 13 when I started boxing under Ray Brown, after that, I took a different route towards Muay Thai, I had 4 Muay Thai fights and felt that something was missing so I went to MMA. I learned BJJ rapidly and picked up a lot through Kru John Allen in Boston, Mass.

PRO MMA NOW: Obviously you have a fight with Albert Alvarez coming up, how did this fight get put together and what do you think about all the attention the fight is getting?

RANDY CAMPBELL: I love it, I love being the underdog. Count me out. When I win it’ll be that much sweeter. The fight was put together by Fran Evans, great guy and an amazing promoter.

PRO MMA NOW: You had said you kind of feel like they want to use you as a stepping stone for Albert. Can you talk about that a little and how that makes you feel?

RANDY CAMPBELL: I don’t feel like Fran or Locked in the Cage would be using me as a stepping stone, I think they’re better people than that, but I know the word that’s going around is that I’m just someone for him to walk over to get to the next level and I don’t stand a chance.

PRO MMA NOW: Why do you think they’re underestimating you?

RANDY CAMPBELL: Mixedmartialarts.com has my record mixed up. My ID number has been given to someone else with the same name and doesn’t reflect my actual record. Also, the WKA fights that I have won have not been posted on that site. 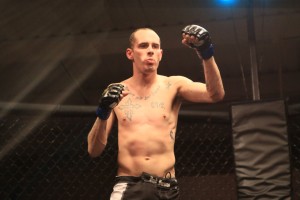 PRO MMA NOW: Had you ever fought for this promotion before?

RANDY CAMPBELL: Yes, and I have a lot of respect for Fran and what he’s doing, they’ve never done me wrong and I fought for them twice. Once I should have won but made a mistake and once I was outclassed, but both times they’ve treated me right.

PRO MMA NOW: So how much do you know about Albert, have you seen him fight? From what you know, how do you think you match up?

RANDY CAMPBELL: I’ve seen his first fight and he looks great. He’s a very upstanding guy and I don’t doubt at all his future in MMA. I think we match up good, his stand up is crisp, I didn’t see a lot of kicks in his first fight, which is something I always utilize. His wrestling is also on point but I think I can work from my back and look for a submission. Either way, stand up or ground, I see an exciting fight on February 11th.

PRO MMA NOW: What would you like to ultimately accomplish in MMA and do you have a goal of a time frame when you’d like to turn pro?

RANDY CAMPBELL: I’d like to fight for Bellator, from what I hear they treat their people very well. I have a few friends that have fought for them and no complaints. Most MMA fighters aim for the UFC, but I think I’d rather stay away from that. I liked Bodog when they were throwing down also. Shit, I don’t care, I just wanna fight, and I see professional status in the next year after winning the title at Stellar Fights in April.

PRO MMA NOW: What do you think about The Ultimate Fighter show, would you try out for that or would you prefer to take a different route? 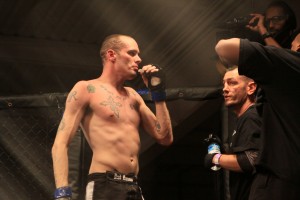 RANDY CAMPBELL: Ha, I tried out for Seasons 5 and 8, both times it seemed like the cast was pre-selected. I wouldn’t waste my time again. Either I’m gonna make it or I’m not, but I’m not gonna be exploited on a reality show.

PRO MMA NOW: Well, best of luck in the fight, Randy and thanks for talking with us. Is there anything else you would like to add?

RANDY CAMPBELL: All I’d like to add is that I’m far from a stepping stone, myself, Fran and Albert all deserve more respect from fans. I know Fran wouldn’t set something like that up, I train hard and I fight hard, and Albert’s a stand-up dude, he doesn’t need people thinking he’s taking an easy fight. My word on this fight is, to all my fans and fans of Albert, we’ll put on a good show. I’m not predicting a winner, but we’re both gonna go in that cage and do what we do best, bang, and before fans want to criticize or talk bad about a fighter, let them step in the cage. It’s not putting any extra pressure on me if they expect me to lose, but it’s putting pressure on him to win. I’m relaxed, confident and ready. See you February 11th. Also, I would like to thank Obsession Fight Gear for sponsoring me for this fight.

For more information about Philadelphia’s “Locked in the Cage” promotion visit their website at www.lockedinthecage.com.