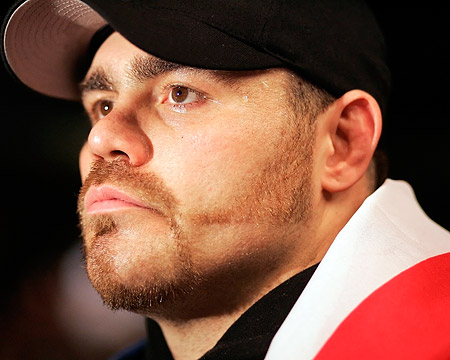 Since being released from the UFC in 2008, Sylvia has done quite well himself, aside from a submission loss to Fedor Emelianenko and KO loss to 1988 Olympic gold medalist Ray Mercer.

Sylvia is currently on a four-fight win streak that includes stoppages of Jason Riley, Mariusz Pudzianowski, Paul Buentello and most recently, Vince Lucero this past December.

ProMMAnow.com (www.prommanow.com) caught up with Sylvia on Wednesday to talk about the upcoming fight, how he matches up with Wagner and how the TUF 10 veteran compares to other people he has fought.

Sylvia also gave us his thoughts on the Strikeforce heavyweight tournament, talked about how he would liked to have been part of it and who he thinks will win.

We also discussed whether or not he feels he may one day get to fight in the UFC again and how he would match up against some of their current heavyweights, including Brock Lesnar.

We also talked about his job as a police officer and what happens when a criminal realizes Tim Sylvia is his arresting  officer. Tim also tells us if he would arrest one of his former opponents if he caught them doing something illegal. Enjoy.

PRO MMA NOW: It’s great to be speaking with you Tim. How are you feeling and how’s your weight just a few days away from your fight with Abe Wagner at Titan Fighting Championships 16?

TIM SYLVIA: Everything is great and I’m ready to go.

PRO MMA NOW: Where are you training for this fight Tim and who is helping you get ready?

TIM SYLVIA: Brandon Adams is my striking coach up here in Iowa.So I’m working out up in Iowa and I just opened up a gym over in Illinois, just across the river in the Quad-Cities area. So I’m working out at both places and doing my weight training and swimming at the YMCA.

PRO MMA NOW: You fought three times last year and won all three, would you like to keep that same pace this year with at least three fights?

PRO MMA NOW: I’ve been wanting to ask you how your job as a police officer is going?

PRO MMA NOW: Can you talk a little bit about what that transition has been like?

TIM SYLVIA: Relatively easy really.I’ve been an avid gun person for a really long time so I’m a really good shooter.I didn’t need much training when it comes to shooting and stuff.Obviously my career as a fighter… it’s been easy to transition over when it comes to restraining people and stuff like that.I guess the only hard part has been learning some of the technical codes for the police department, but other than that it’s been relatively easy.

PRO MMA NOW: Are you in a patrol car?

PRO MMA NOW: Have you had any experiences where you pull someone over or approach a perp and they recognize you?

TIM SYLVIA: Oh yeah, I get recognized a lot actually.And some of the requirements where we work, we work on the weekends and we have to do bar checks, where we go through at midnight and then go through again at closing at three. Obviously a lot of the drunks know who I am and stuff and it gets a little irritating when you’re walking through and people want to touch you and stuff and you got your gun on. You have to let them know not to touch you.

PRO MMA NOW: Have you had to throw the smackdown on any criminals?

TIM SYLVIA: No, everyone knows me so they’re pretty well behaved around me.

PRO MMA NOW: That probably helps, they know you’re capable of restraining them if need be, right?

TIM SYLVIA: Yeah it definitely helps.And the full-timers I work with like it too.

PRO MMA NOW: Are they pretty good about giving you time off to train and prepare for the fight? Will all the guys from the police station be watching?

TIM SYLVIA: Yeah it’s great. I work whenever I want. It’s no big deal. The only thing I’m required to do is work eight hours a month.

PRO MMA NOW: So how do you see yourself matching up with Abe Wagner and is there anything particular about his skill set you need to maybe be cautious of?

PRO MMA NOW: Were you familiar with him, did you watch him on TUF (The Ultimate Fighter) or anything?

TIM SYLVIA: Yeah I watched him on TUF, he’s just another tough heavyweight.

PRO MMA NOW: Anything about him that would separate him from other guys you’ve fought, I mean you’ve been in there with the best?

TIM SYLVIA: He doesn’t have the experience that I have against the guys that I’ve fought and obviously I think that will benefit me a lot. You know, ring control experience and just being more experienced than he is.

PRO MMA NOW: It must feel good to be back in a main event on a televised card. How does that feel?

PRO MMA NOW: What do you think about this Strikeforce heavyweight tournament they got going on; you have fought a few of these guys?

TIM SYLVIA: I think the tournament is awesome, I wish I was in it. Definitely one tournament the world will remember for a long time. It’s got some of if not the best heavyweights in the world fighting in it.

PRO MMA NOW: Who do you see as winning the whole thing?

TIM SYLVIA: Fedor, Alistair Overeem or Josh Barnett.Now I’m not sure how all the brackets are lined up, but if Josh doesn’t meet any of those guys before the finals, he will be in the finals. All depending on which one he meets, but I’m kind of rooting for Josh as the dark horse. I’m not sure… Fedor.

PRO MMA NOW: What do you think about Fedor’s first fight coming up with Bigfoot?

PRO MMA NOW: What was it like for you seeing Fedor lose?

TIM SYLVIA: Disheartening. Just because I know I could have done the same thing, but just didn’t get a chance to perform the way I should have. It was an uncommon mistake on his part as well, he went in for the kill and got a little sloppy. If those guys fight 99 more times, I pick Fedor to win 99 times.

PRO MMA NOW: You have a nice four fight win streak going. You finished all those guys. If you get past Wagtner that’s five. How many more wins do you think you would need before we might see you back in the UFC?

TIM SYLVIA: Probably after this fight I could be back in the UFC or go to Strikeforce.

PRO MMA NOW: So you would be open to Strikforce?

PRO MMA NOW: I know Dana White has made some comments about you in the past that weren’t too nice but, the fact is you won the UFC heavyweight title on two separate occasions. You defended the belt several times and have beaten some of the biggest names in the sport. We’ve seen Dana change his mind about people, how likely do you think it is we might see you back in the Octagon?

PRO MMA NOW: Yeah, I think if he can make up with Tito the door is pretty much wide open.

TIM SYLVIA: Exactly (laugh) and I’ve never said anything bad about Dana. Tito and Dana exchanged words many times and had a lot of bad press and stuff against each other. I’ve heard that Dana has said some bad things about me but I just kept my mouth shut and focused on what I’ve got to do and that is beat people up and win fights.

TIM SYLVIA: The last time I talked to Dana was at the press conference with myself and Nogueira (Feb. 2008).

PRO MMA NOW: Personally, I would love to see you against Brock Lesnar or some of these other guys in there right now. What do you think about Brock being a coach on the next Ultimate Fighter?

TIM SYLVIA: I don’t know what he’s going to coach, (laughing) how not to run away from someone when they’re punching you? Obviously it’s for publicity reasons. I don’t even think… Who’s the other coach?

TIM SYLVIA: Yeah Dos Santos, they’re going to have to have an interpreter for him I believe. He can’t even speak English. So they’re going to have 16 guys come in and one coach can’t even speak English so… The gap there is going to be difficult for him coaching and stuff. We don’t even know how good of a coach he is yet. He’s had what, six or seven fights? So both coaches, head coaches, are going to have to bring in a good coaching staff of their own to help teach these guys and hopefully improve these guys so they become good fighters. At the end of the day it sidelines the heavyweights right now and puts them on national TV and builds them some more hype for the fight.

PRO MMA NOW: We’ve seen that Brock doesn’t like to get hit too much. How would you like to put some leather on him and how do you think you’d match up with him?

TIM SYLVIA: I match up very well. I’m actually bigger than Brock when it comes to height and stuff like that. I don’t see him being much stronger than me. I’m definitely a better striker. He’s a better wrestler. So it would be real interesting and a fun fight I would look forward to that’s for sure.

PRO MMA NOW: Are you having to cut any weight for this fight?

PRO MMA NOW: What do you think you’ll be weighing in at?

PRO MMA NOW: Okay, last thing I wanted to tell you a story about one of your former opponents, Ray Mercer. I saw him at a hotel in St. Louis when we were up there covering a show and I asked him if we could do an interview. He said, “You got any weed?” – I said, “Nah man, sorry.” — But if you caught Ray Mercer smoking some weed in your town, would you arrest him?

TIM SYLVIA: Oh absolutely! — A funny story about Ray Mercer is right after that fight we tried to get an immediate rematch and he wouldn’t take it.

PRO MMA NOW: Well, Tim, thanks for speaking with us at ProMMAnow.com (www.prommanow.com). If there’s anyone you’d like to thank or send any shout outs, go right ahead.

TIM SYLVIA: I just want to thank some of my new sponsors and any of my old sponsors that have stuck through me through all these rough times I’ve had and looking forward to being on one of the big show in the future.