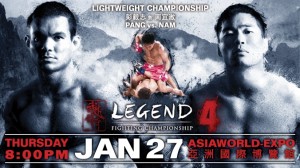 It was announced today that Canada has been added to the list of countries which will broadcast Legend FC 4 on pay-per-view television. The pay-per-view broadcast will air in Canada and the U.S. on Friday, Jan. 28, at 8 p.m. ET/5 p.m. PT.

In Asia, the event will air in Hong Kong, Singapore and Indonesia on KIX and on Power Sports Network in China.

In the Legend FC 4 main event, Legend FC lightweight champion, Adrian Pang of Australia, will put his belt on the line against South Korea’s Nam Yui Chul. The bout is a re-match of the Legend FC 1 main event, which ended in a majority draw.

In the co-main event, New Zealand’s Rod MacSwain will take on South Korea’s Kim Hoon for the vacant Legend FC welterweight title. Both fighters are coming off quick first round stoppages but Kim will have his hands full against the 11-2 MacSwain.

Legend video clips, images, news and background information on the fighters are all available at www.legendfc.com.