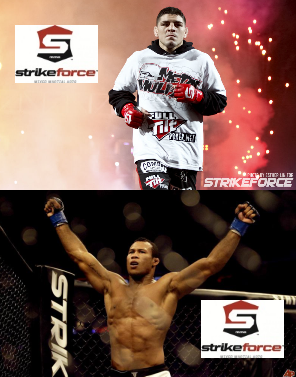 You may have already heard some of Diaz’s comments from the call where he talked about wanting a couple million dollars to move up to 185-pounds to fight Jason “Mayhem” Miller and where he ripped on UFC welterweight Josh Koscheck; we posted the audio of that HERE earlier.

But now you can hear the entire conference call. Diaz has plenty more to say, that’s for sure. He talks extensively about defending his title against Evangelista “Cyborg” Santos and how they match-up, and Jacare discusses his title fight bout with H.I.T. Squad slugger Robbie Lawler.
[podcast]https://prommanow.com/audio/nickdiaz-meltdown.mp3[/podcast]

NOTE: The audio quality from the Strikeforce call is not the greatest. There were kids playing in the background and Diaz had a bad connection at times. However, there were enough redeeming qualities that we felt it was worth posting.

“I try to eat a raw, vegan diet. I get it done. There’s no vegan food where I live so I have to travel to get it. I have to travel to bigger cities to train too so I just make it part of my day. It’s about an hour away. I’ve been doing that since I was 16, 17 years old so I’m pretty used to it. It helps me not feel like shit when I’m training all day long.”

On his triathlon training:

“It helps me get into shape for five rounds. I’m in pretty good shape and have overall athleticism so I can then start focusing on just my fights. I compete in the sport of triathlon so if I decide to do a race then I’ll train for it. During the season I’ll do a couple of sprint distance triathlons or smaller triathlons at some smaller distances. And I’ll also do some distance triathlons. Depending on the timing of my fight schedule and if I win and feel good I’ll do one two or three weeks after a fight. Or the next month I’ll compete in a half Ironman triathlon. But I do usually get one or two of those in a season.”

“They help each other. I know I’m doing something right if I’m out racing. I don’t want to fight unless I get paid a lot of money. I’m not that competitive in triathlons but I am in MMA. I think everybody should race in triathlons. I think they should swim and they should bike and they should run. If they can’t swim they should learn how to swim. It’s something you should learn how to do. I think each complements the other – if I can’t run then I can swim and if I can’t swim I can get on my bike. Some people try to stay away from all three.”

What about Cyborg coming down to your weight class?

“He looks good at that weight (185 pounds). I always tell people if they are too small for 185 pounds they should come down to 170. I usually call people out for being too small at that weight. But I wouldn’t point the finger at him for that one. But I think 185 is probably a better weight for him.”

How would you describe Cyborg’s style?

“I think he’s a brawler and he kicks well. He’s a kick-boxer brawler. He’s a good fighter. He has knockout power and he hits hard. He can hurt you with one punch. If you hit anyone right with a good punch they’ll go down.”

How does Cesar Gracie keep all the parts of your game in focus for your fights?

“He’s a great mixed martial artist. He reminds me where I came from. I know if I’m leaving something out in training that my trainer will point it out. Everyone kind of comes together as a team. Cesar eats pretty good himself. What I don’t understand is that there are people who have gone to college and they eat like shit.

“I think (Cyborg) is the best opponent for me right now. I want to fight George St. Pierre. I think (Jake Shields) is going to take him out (when they fight April 30) to be honest.”

Would you be willing to participate in a non-title Grand Prix like the STRIKEFORCE heavyweight format?

“Yeah, if a title is not on the line. That sounds pretty cool.”

Do you think the welterweight division is where you’ll stay?

“I don’t know. I wouldn’t mind moving up. I’d just like to get paid for it, you know? I don’t like when I hear people say I didn’t accept the fight with (Mayhem) Miller because I was too small. I never said anything about that. I said if I’m going to go off-track and screw with my whole season and it’s going to screw with my whole year and screw with my capabilities fighting at 170 then I’m going to have to get paid in full. I’d like to have a reason for doing that. I’d like to get paid double or triple to do something that crazy. To fuck with my weight like that? I’d rather move down than move up if you’re not going to pay me for it. I might as well move down than up. Am I going to get paid for it? I’ll fight at 155 pounds unless they offer me a big money fight at 185 pounds. If they do then I’ll make it happen but I’m not going to do it for free; for the same as I would make at my normal 170 pounds. Why would I? It’s more work. That’s why I never wanted to sign for that fight with Miller, because they were talking about me moving weight. I was like tell these guys to fucking get in shape and make weight like I do. It’s fucking hard enough for me to make 170 pounds. You know what I mean? He acts like he wouldn’t be able to do it. He doesn’t want to work hard like me. That’s the problem. So he can work his ass off and make 170 pounds or 175 pounds or someone can fucking pay me a couple fucking million dollars to move up to 185 pounds to fight him. I know someone’s got that shit on videotape. That motherfucker doesn’t want to fight me. Talking about how he wants to fight me every chance he gets. I’ll fight him anyway. I just want to get paid. Pacquaio’s making 40 fucking million dollars. He’s making a couple million dollars. I’m over here fucking driving a Honda because my shit’s breaking down. Fuck all you motherfuckers.”

So what you’re saying is money is the key factor to fighting Miller. Bad blood doesn’t factor into it as much?

How do you think you match up against some of the UFC’s top guys?

“I think I got here first and I was fighting before most of them, including George St. Pierre in the UFC. I was at it first. I was mad that they were getting fights and getting all this recognition when I was at it first. I thought it was first-come, first-serve. Like Josh Koscheck. I cornered a guy at a bar who probably had two fights in his life. They worked it like he was set up to fight Josh Koscheck. Then he gets an ass-whuppin. That’s what I’m saying. They’ve made easy fights for those guys. These guys have got like six or seven fights. Like all easy fights. I’ve never got to fight a guy like the one they brought into fight Josh Koscheck. So when you bring up fighters like that and tell me they are the best fighters in the world it’s a fucking joke. Those guys are all ranked now but I was here first. So let’s fight then. Let’s make it happen, you know?

Who would be a dream fight for you in or out of STRIKEFORCE?

Why are you so quick to call out a guy like St. Pierre who you know is unable to fight you?

“People think this guy is better than me and it’s bullshit. He went five rounds with Josh Koscheck. I just told you about Josh Koscheck, right? Why shouldn’t I get to fight him? Why are you saying he’s unavailable? Because we fight for different companies?”

“I want to show everyone that I’ve improved my cardio, my strength and my Jiu Jitsu technique. I want to show I have all those elements in my game.”

What is your game plan against Robbie Lawler?

What have you done to work on your standup game?

“I have a great gym behind me. We’ve been training a lot in cardio and boxing and learning how to walk around the cage and the ring. I know he’s a good boxer so I’m doing everything necessary to prepare for that. I’ve been training everything: boxing, wrestling, Jiu Jitsu, so I’m prepared to go in there and show everything.

“I’ve fought a lot of tough guys and I’ll put Robbie Lawler right there in the mix of the toughest I’ve faced.”

Is there a dream fight out there for you?

On the recent mudslides in Brazil:

“It was pretty sad what happened recently in Rio. Luckily for me I had no friends or family that were hurt or killed. Everyone is just walking around trying to listen and watch for news. It’s the biggest tragedy and natural disaster that has ever happened in Rio. I have been busy training but all of Brazil is very sad what has happened in Rio.”