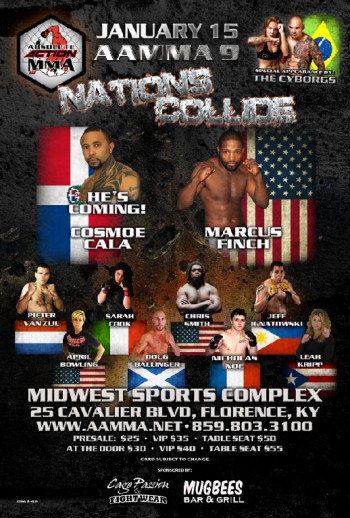 Tonight at Midwest Sports Complex in Florence, KY, Absolute Action MMA presents Nations Collide, a pro/am MMA event with eighteen fights currently scheduled on the card. Pro MMA Now is on the scene and will bring you results from the entire card and play-by-play for the four professional fights on tonight’s card.

The card is scheduled to start at 8:00 PM. Check back for all the action from some of the region’s best fighters.  For those of you not in attendance, tonight’s fights are also available on gofightlive.tv.

Round 1 – The first pro fight of the night is opened with a jab from Combs. The two trade some short shots and Combs lands a leg kick. Combs gets in with a jab, and the two exchange briefly before Combs fires off a head kick that drops Kleman.  Combs jumps in to land more shots and the ref quickly moves in to stop it. Jared Combs wins by KO (kick) at :39 in Round 1.

Round 1 – Finch opens with a short left and presses Triplett against the cage.  The struggle and Finch lands a good knee to the head, pressing Triplett against the cage.  They go to the ground and Finch lands a shot from the top as Triplett tries to pull him down.  Finch lands a solid knee to the body from a semi-standing position and keeps Triplett pinned against the cge on the ground.  Finch stands up and lands shots from the top, transitioning to kicking Triplett’s legs.  Finch moves back in and lands big shots from the top.  Triplett reaches up to pull Finch down but Finch stands and backs out and Triplett grazes him with an upkick.  Finch moves back in and lands another shot and Triplett briefly moves for an armbar but Finch stands and kicks Triplett’s legs again before moving back in.  Triplett works for another armbar but Finch stands again before moving back in, landing some body shots.  Triplett stays busy from the bottom landing some short headshots, but Finch still has the dominant position.  They move and Finch works from inside Triplett’s half-guard before getting out and  and landing more shots, then taking Triplett’s back, but Triplett gets out and reverses, landing some shots from the top before Finch pulls him down.  Triplett lands two knees to the body from side control, and then puts a knee on Finch’s belly briefly before landing another pair of knees to the body.  Finch spins out and takes the dominant position, landing multiple shots from the top.  Finch stands and lands a final kick to Triplett’s leg before the bell sounds.  Pro MMA Now scores the round 10-9 for Finch.  If Triplett had been able to keep the dominant position until the end of the round, he may have been able to pull it out.

Round 2 – Triplett swings for a big hook at the beginning but misses.  There’s an exchange, and a kick attempt by Triplett sees him slip and Finch rush in and shoot, trying to take Triplett down.  Triplett defends briefly but Finch scores a double-leg and takes him down.  Finch lands a short elbow from the top.  Finch lands more shots and Triplett tries to scramble but Finch keeps the dominant position, moving for a kimura, but Triplett spins and lands short shots from the bottom.  Finch stands and Triplett tries to kick Finch’s leg from the bottom but Finch moves down and retains the dominant position.  Triplett tries to kick Finch off, but Finch stays on top and Triplett lands a couple shots to Finch’s head.  Finch works in a shot from the top, stands, then moves back in to land more shots.  Finch keeps landing shots from the top, but Triplett works his way back to the feet.  Finch tries to take his back standing and Triplett flips forward hoping to shake Finch off.  Finch manages to stay on and moves for a rear naked choke but Triplett turns into Finch and starts landing some shots from the top, alternating between short punches and elbows.  Triplett lands more shots and Finch manages to knock him down after Triplett tries to stand.  Finch then stands and lets Triplett up as the round ends.  Fairly dominant round for Finch.  Pro MMA Now scores it 10-9 for Finch.

Round 3 – Action from the start of the last round as Triplett tries to throw a knee and Finch shoots in looking for a double-leg.  Triplett defends and lands some body shots as Finch still works for the double leg.  Finch scores the takedown but Triplett looks for a guillotine as Finch lands body shots.  Finch gets his head out and lands short shots from the top.  Both guys have visibly slowed since the first round.  Finch manages to get mount and then takes Triplett’s back when Triplett rolls.  Finch pulls Triplett back and looks for a rear naked choke, but as Triplett spins, Finch takes the mount again.  Triplett tries to shake him off, does, and both guys are slow to rise.  Finch moves in with a jab and Triplett goes down for a takedown but Finch defends.  Triplett lands a knee to the body and Finch looks for a double leg but Triplett defends.  The referee separates them as the action slows.  Triplett fires off a right and Finch a kick and the two exchange, Finch pushing Triplett against the cage again as the round expires.  The closest of the three rounds, but I still see Finch winning this round 10-9.

Round 1 – Hines and Bennett met at a previous AAMMA show, with the fight ending in a no-contest when Hines was unable to continue after Bennett landed an unintentional kick to the groin.  Bennett presses forward and lands a solid headkick.  Hines catches it  and the two go to the ground, but Bennett quickly slaps on an armbar, immediately forcing the tap.  Chris Bennett wins by submission (armbar) at :16 in Round 1.

Round 1 – Jeff reaches out with a jab but it falls short.  He grazes Cala with a leg kick and Cala lands one of his own.  Cala misses with a second and Jeff lands a leg kick of his own.  Cala lands a body kick and looks for another one but Jeff blocks it.  Jeff kicks but Cala catches it and floors Jeff with a hard right.  Cala lands more shots and Jeff struggles to his feet.  Cala continues to land more shots and then knees to the body when Jeff goes down, and the ref moves in to stop it.  Julio “Cosmoe” Cala wins by TKO (strikes) at 1:52 in Round 1.

Fight of the Night – Matt Green vs. Dom Steele
Although this fight ended early in the second round, I still give it the nod for Fight of the Night. It’s rare to see such a fast pace from two heavyweights and both Green and Steel delivered the whole time they were in the cage – nonstop action for the whole first round and the first minute of the second. A great show by both guys.

KO of the Night – Justin Lobenstein over Michael Rudick
An impressive KO just 16 seconds into the first round. Although some thought it was an early stoppage, referee Chris Kinman made the right call when he pulled Lobenstein off after seeing Rudick’s eyes roll back in his head.

Sub of the Night – Chris Bennett over J.R. Hines
Bennett is excellent at quickly finding opportunities for armbar, and this win was no different as he slapped one on just 16 seconds into the fight.

Absolute Action MMA will host their next event in Lexington, KY on February 12 for their first show in Lexington, and then it’s back to northern Kentucky on February 26.  For more information and tickets to the shows, visit AAMMA.net.