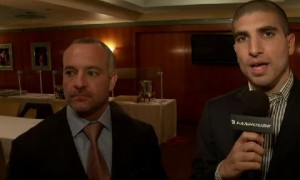 UFC CEO Lorenzo Fertitta a.k.a. one of the richest men to ever breathe took a few minutes to speak with Fanhouse’s Ariel Helwani Thursday at Madison Square Garden following the UFC press conference to support MMA regulation in New York.

Fertitta explains the timing of the press conference was to “get out in front of this new state legislature” that starts in February and to continue the education of legislators and the public regarding the facts about the sport of mixed martial arts.

Fertitta points out that there are cities in the U.S. and around the world vying for and literally bidding against one another to bring the UFC and the economic impact that comes with it to their city while New York is in effect saying “stay away from us, we don’t want you here.”

Fertitta also talks about the UFC’s continuing global expansion efforts and says the goal is to have a live event in Asia before the end of the year. He also says “Scotland is a priority” but the problem right now is “they don’t really have the facilities we would like to have to go there.”

The arena in Scotland seems to be much smaller than what they would like but also, having said that, “Scotland is a priority and we will be there,” promises Fertitta. Other focus points for the immediate future are Brazil and Mexico.