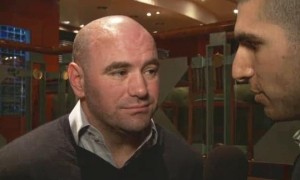 UFC President Dana White speaks with Fanhouse’s Ariel Helwani following Thursday’s UFC press conference at Madison Square Garden to support MMA legalization and regulation in New York. White insists they are doing everything they possibly can to get the sport sanctioned in the Empire State and is hopeful 2011 will be the year, but is still far from certain this will be the year it happens.

White does say he had one conversation with McMahon regarding Lesnar taking part in Wrestlemania, so at least he acknowledges these rumors were not born out of thin air. However, he also confirms his answer was “an emphatic NO.”

White touches on the Jacob Volkmann vs. Barack Obama situation and says he did not know Volkmann had been visited by the Secret Service. He gives his take on the whole thing, “These guys are all there own people with their own opinions and unless they are doing something that is incredibly illegal or real bad, what am I going to tell this kid how to feel about the President of the United States? That’s his God-given right living in this country.”

White confirms Chael Sonnen is on “indefinite suspension” says there are “some serious charges against him right now” and “he needs to get his personal life in order” and “handle his business” first before stepping back in the Octagon.

Finally, White comments on a recent video that was released showing him on stage with the Godfather of gangsta rap Snoop Dogg. In the video White is seen dancing from side to side, throwing his hands in the air like he just don’t care and generally getting down like an O.G. White says, “I heard that video was out there and I do remember and I’ll be honest I had a couple of drinks that night. … Listen man, when Snoop Dogg calls you on stage you get your ass on stage, you wave your hand and sing the songs you remember.”