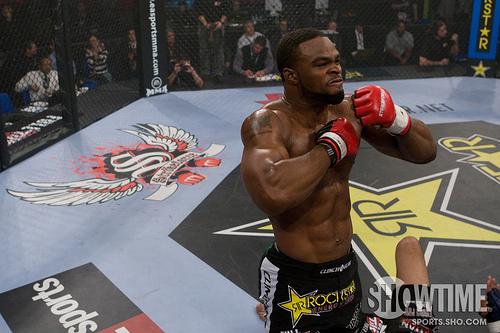 Every year my new year’s resolution is the same. I always try to make myself breakdown more cards (this year I also want to reach Starbucks gold card status, but that is a different story). As the cliché goes, there is no time like the present.

Jack Bratcher and Denny Hodge have been on the ground in Nashville and doing great work getting our readers prepared for Friday night’s show. Therefore, I have stepped up and decided to do a little preview. I also drank three cups of coffee today alone, so I am well on the way to reaching my goals.

Strikeforce Challengers 13 is probably the best card in Challengers series history. On top of that, this weekend is a free preview of Showtime, so a whole new audience can watch the card live.

Tyron Woodley vs. Tarec Saffiedine
Rarely in MMA do you see a striker pick up the wrestling game the way Saffiedine has. If fact, I did not believe it was possible. I actually picked him to lose to both Nate Moore and Brock Larson, and boy, I was wrong.

However, I am going to have to pick against him again. Woodley is a prospect with next-level potential. He has the perfect wrestling style for MMA. On top of that, he has shown natural aptitude in both the striking and submission games. Strikeforce should also be commended for bringing him along properly. Look for Woodley to hold his own on the feet, but ultimately finish the fight with a head and arm choke on the ground.
Pick = Tyron Woodley

Daniel Cormier vs. Devin Cole
When people say things like “MMA has come a long way.” I always think about Cole. When he made his IFL debut against Carlos Cline the message boards were alive calling him the next big thing in the heavyweight division. Now, we know that he is just a guy who can win fights when he has a wrestling advantage.

Cole will not have that advantage against Cormier. He has a level of wrestling that alone could lead him into title contention. However, he has picked up just enough of the other aspects of the sport and shown that he has some power.
Pick = Daniel Cormier

Ovince St. Preux vs. Ron Humphrey
I don’t think you could possibly understand how hard it is for me to not make a joke about how “Humphrey smoked George Bush at Strikeforce Challengers 7.” Anyway…

This fight is an example of some great match making. Both fighters currently inhabit an in-between spot in the promotion. A win here could propel either fighter into bigger fights in the light heavyweight division. Humphrey has fought the better competition. However, I can’t get the vision of St. Preux putting a 10-7 round on Benji Radach out of my head.
Pick = Ovince St. Preux

Amanda Nunes vs. Julia Budd
Whenever I break down a women’s bout I find myself saying something like “this is a battle between potential and experience. Nunes has more fights and even beaten some decent competition. Budd’s only fight was a win over Shana Olsen. However, Budd should have the physical game to outwork Nunes. Is the winner of this fight next line for “Cyborg”? Strikeforce doesn’t really have anyone else.
Pick = Jullia Budd

Rhadi Ferguson vs. John Richard
The long-awaited MMA career of Ferguson is in full swing. Fans have wanted him for fight for years. They are impressed with his Olympic pedigree and grappling ability. He is getting up there in age, but he still might be able to win his way into some big name fights in Strikeforce. Richard is taking this on late notice after Ferguson’s original opponent had visa issues. Look for Ferguson to score a quick takedown and impress in the grappling game.
Pick = Rhadi Ferguson