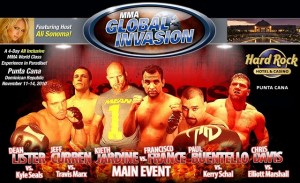 In what may well wind up in a Florida courtroom, Nemesis Fighting Promotions owner Tim Fields spoke exclusively to ProMMAnow.com’s Susan Cingari to share his side of the story, following allegations by several fighters, including Keith Jardine, Eliot Marshall, and Paul Buentello, that they haven’t been paid for competing on the Dec. 11 card in the Dominican Republic.

Fields stressed that he was concerned with the ticket sales long before the fights ever took place. He explained that the Barcelo Hotel, where the event took place, is a weekly vacation resort, with guests typically checking in at the beginning of the week and leaving at the end of the week, and they had marketed the fight as such to the local community in Punta Cana through billboards, posters and tour operators.

Fields, whom we reached thanks to an anonymous reader tip, also said that the problems were exacerbated by the resort’s refusal to allow Nemesis to advertise in the hotel lobby, near restaurants, and other gathering places.

“That was the issue of mine with Bob,” he said, referring to his business associate, Bob Fill. “Why was that not cleared? We should have all these banners, [and] no one at this resort knew there was a fight going down at the convention [center] since there was nothing around.”

He continued, “So it got to be around 7:30. I walked down to the convention center to see how ticket sales were going and at 9:00 people started coming in… at that time I had heard that they had sold $14,000 in tickets out of about a half a million … I spoke with Bob down at the Barcelo Convention Center and said, ‘Look, if we don’t have enough money to pay these fighters, we have to cancel and refund the tickets. And at that point he told me, ‘Nah, its okay. Everything’s gonna be okay. We’re going ahead with the fight.'”

However, less than 300 tickets were sold and Fields was not the only one worried. According to Tim, he had a conversation backstage with Jardine’s manager John Madrid, who was equally alarmed.

Despite the warning signs, the show went on as planned and the fighters held up their end of the bargain, wowing the fans that came out. In fact, that is the only thing that everyone can seem to agree upon. “The fight card was incredible. The whole night [had] unbelievable fights,” said Fields.

After the fight, Fields, Jardine and Madrid went out to have a late night meal. During the meal, Madrid explained to Fields that one of the fighters — Marshall — was leaving early in the morning and needed his check by 7 a.m. so he could make a 10 a.m. flight. When Fields returned to the hotel around 4 a.m., he told Fill of Marshall’s situation and said he was told again by Fill that the checks would be available and that the fighters could stop by and pick them up.

Fields said he stopped by Fill’s room at 6:30 a.m. and picked up a check to drop off with Elliot Marshall. He then returned to his hotel room and went back to bed.

According to Fields, Fill called about one hour later and told him to stop by his room. When he got there, Fields said that Fill told him the following: “Look, I gotta get back to the States and make these checks good. I don’t want to sign the checks. I would rather you sign the checks.”

Fields refused, telling Fill he was not on the checking account and was not in charge of the money. Fields left and got on a plane shortly thereafter. In fact, Fields said he was unaware that the production company had not been paid and believes he has been made a scapegoat in the whole situation.

“I didn’t have any responsibility for the fighters,” Fields said. “My name was not on the checking account. There was over $250,000 invested, and I can’t tell you where that $250,000 went, where they spent it all on.”

Fields went on to say that, in hindsight, they should have canceled the event, and he’s hopeful that a deal will be worked out with the fighters via pay-per-view and they get there money back.

When asked why he had not made any statements earlier, Fields responded that he did not know all of  the facts. The facts about the fallout of the show came out after the event, but now he hopes to set the record straight and have the truth come out.

And with Nemesis owing a minimum of $233,000, there is likely more to come with this story. Just days ago, Jardine and Madrid revealed that they had met with the U.S. Secret Service and they are now looking into the case.

ProMMAnow.com would emphasize that this is only one side of the story and welcomes the opportunity to speak to Bob Fill, who at the time of writing this article could not be reached. The Nemesis website account is currently suspended, but Susan will continue to try and reach the other affected parties.