Dave Camarillo, founder of Guerrilla Jiu-Jitsu and grappling coach at American Kickboxing Academy, needs no introduction. If you did not know Dave before this year began, you definitely know him now.

His face was all over your television set for weeks and weeks this fall as one of Josh Koscheck‘s team of coaches on The Ultimate Fighter: Team GSP vs. Team Koscheck on Spike TV. He is also one of the driving forces behind current UFC heavyweight champion Cain Velasquez, who in October of this year took the title from Brock Lesnar with a beating so bad “The Next Big Thing” may actually be contemplating a return to pro wrestling.

Dave’s connection to this site began through our mutual friend “Fast” Eddie Constantine, who unfortunately is no longer with us. Eddie was one of our original staff members. He was also a friend and student of Dave’s, and it is there we begin our conversation.

PRO MMA NOW: Hi Dave, thank you for speaking with us at ProMMAnow.com. It is coming up on the year anniversary since the passing of our good friend “Fast” Eddie Constantine.We sure miss him. We miss hearing you on the radio show (The INFO) with he and Matt. I haven’t gotten to speak with you about all this, but how did Eddie’s passing affect you and how do you remember Eddie when you think back on him?

DAVE CAMARILLO: I remember when I first heard. It was one of those moments where time stops. When I think back on him now I just remember what a hard and passionate worker he was. And that is the greatest quality anyone can have!

PRO MMA NOW: I know he sure would have been happy to see what you guys accomplished this year. 2010 was a big year for AKA. Can you talk a little about some of the highs and lows over the past year and some of the things you guys achieved this year.

DAVE CAMARILLO: We won a UFC Title. That was one of my greatest accomplishments in my life. You can come close in this business and people will never remember. But when you win, it legitimizes everything you do. As far as the lows, I would have to say seeing some of our amateurs lose after training so hard. It is a tough business, and when someone works for something so hard it is a blow to all of us when they lose. But again, that is a great opportunity to see what we are really working with in a fighter.

PRO MMA NOW: Earlier this year when I was doing some research on the TUF 12 coaches, I realized the respect you had for Team GSP’s John Danaher. What were your initial thoughts when you found out you would be coaching opposite him and what sort of interaction had you had with John prior to the show?

DAVE CAMARILLO: I have cornered against him a few times. It is all apart of the business. I have great respect for John. In my eyes he is one of the best coaches on this planet. I feel if I set my sights at being that good I can’t go wrong. Being on the show opposite to him was an honor. It is true I wanted to win every fight, but in the end I never really felt like there was a real Team Koscheck and Team GSP. It was just a bunch of fighters that fought each other and we coached them. In the end it was Team GSP vs Team GSP, which kind of destroys the idea that the team really mattered. Teammates are not supposed to fight one another.

PRO MMA NOW: Did you enjoy doing the TUF show and is it something you would like to do again? What was the best part about doing the show, and what was the worst?

DAVE CAMARILLO: I enjoyed myself after it was over. I learned a lot, and after the show I was able to take it all in. I would do it again if we had another shot at it. It is an interesting sociological/psychological case study. And seeing the transformation from the first week to the last in the fighters was very interesting. The best part was how much I learned. The worst was being away from my family and my business. It takes a lot of energy to do the show. But it was worth it.

PRO MMA NOW: Have any of the TUF 12 fighters come out to train with you guys at AKA since the show, if so, who? Who were some of the guys you were most impressed with, who you think will go far in the sport?

DAVE CAMARILLO: Sako came to train with us and now trains fully at AKA. I spent a month with him preparing for the finale and he made some great progress. He’s dedicated and he listens. He has a lot of work in front of him but I feel he is ready for it. I am obviously most impressed with Nam Phan. He is a great student and warrior. He was one judge’s score away from making the final and his attitude throughout the experience was amazing. The flak he got from some of the guys was unwarranted. I felt that most of the guys on the show that complained about Nam were jealous of his performance.

PRO MMA NOW: Something I have often wondered about is this – what is your relationship with Josh Koscheck like? The reason I ask is because I know you are very much into the concept of being a “martial artist”, and I don’t know Josh personally, but from the public image we see, he would seem to be more of a “fighter” – and maybe I’m completely wrong about that. But I was just curious as to how you guys get along and is it difficult to work with someone who may be more interested in being a “fighter” than a “martial artist”? You understand what I mean? 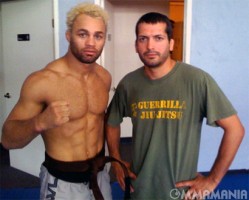 DAVE CAMARILLO: Some guys in the gym will always be easier to work with than others. That is a given. And yes, Josh is a fighter. But there are two realities that need to be pointed out about Koscheck. Number one: People still think of MMA as more of a sport than a business and that is false. Josh did a great job hyping this fight. Most of the people that bought tickets or ordered the pay-per-view did so in hopes that GSP would beat Koscheck. Number two: It is easy to sit on your couch and smack talk a fighter. These people do this whether he wins or loses. They do this if they don’t like his attitude, his haircut or just some of the things the fighter says. One thing they forget, they are on a couch, and the fighter isn’t. Koscheck is a hard worker and I love him for that! I do believe in Martial Arts and carrying yourself in a good light in front of the public. But if there is anything I dislike more than that it is laziness!

PRO MMA NOW: Does any of Josh’s antics bother you, like the way he acted toward Georges St-Pierre or his attitude? How do you deal with that sort of thing when in a sense he is out there representing AKA?

DAVE CAMARILLO: Again, it is a business. Tickets will sell. Seats will fill. And I don’t have total control over anyone. I will continue to train him until the day comes when he decides to do something else. And I will always respect him for what he has done.

PRO MMA NOW: What are your thoughts on the way the fight went down between Josh and Georges at UFC 124? Were you surprised by GSP’s domination and where do you see Koscheck going from here?

DAVE CAMARILLO: I was not surprised. If you don’t execute right away on GSP he takes control and is great at keeping it. I am a big fan of GSP. He is a model Fighter and Martial Artist. Koscheck needs to get some high profile fights and stay on track. Koscheck vs Hughes would be great to see!

PRO MMA NOW: What are your thoughts on Jon Fitch vs. B.J. Penn, do you think Fitch can get Penn to the ground, and how do you see their BJJ matching up?

DAVE CAMARILLO: I cannot say anything about BJJ. BJJ is a sport, this is a fight. There are no secrets going into this one. BJ’s victory against Hughes was not shocking. We know what BJ is capable of. And BJ knows what Fitch will bring to the fight. One thing is for sure, Fitch is the toughest fighter currently fighting in the UFC. He will not stop.

PRO MMA NOW: Finally Dave, how do you see the Cain Velasquez vs. Junior Dos Santos fight going and would it be in Cain’s best interest to get the fight to the ground?

DAVE CAMARILLO: Cain will be ready to fight anywhere the fight goes. I think Cain is a better striker than JDS. But JDS has better power and is the most dangerous Heavy Weight alive. You can count on Cain being ready for JDS. Cain is like GSP, he will execute as soon as round one begins.

Thanks to Dave and his wife Shumei. Please check out Dave’s site at www.DaveCamarillo.com where you can get online jiu-jitsu training and read Dave’s blog. You can pick up Dave’s classic work, Guerrilla Jiu-Jitsu at Amazon and follow Dave on Twitter @DaveCamarillo.