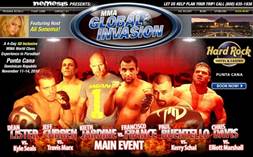 Albuquerque, NM. – December 22, 2010 – The Nemesis MMA Global Invasion fiasco has definitely struck a chord with both fighters and fans in the MMA community. Foreign promoters scamming unsuspecting fighters has become an increasingly popular headline, possibly because there have been no real repercussions. That is, until now.

UFC veteran Keith Jardine and his manager John Madrid have been seeking restitution for the fighters that fell victim to Tim Fields and Bob Fill of the Nemesis fight promotion since the debacle began. On Monday, December 20, Jardine and Madrid personally met with members of the United States Secret Service and they are now looking into the case.

While in the Dominican Republic, the fighters involved fell victim to countless wrongdoings committed by the fly-by-night promotion. The conditions at the event were almost incomprehensible; fighters had to share gloves, there were no official judges, no commission, and the medical staff consisted of a security guard with a basic first aid kit.

The following morning when the fighters reported to get their pay, their room keys were deactivated, leaving them without accommodations.. Fighters then had to face the grim reality that they would not be getting paid. Not a single check issued by the promotion cleared the bank, leaving the fighters and commentators (UFC veterans Mike Van Arsdale and Seth Petruzelli) empty handed.

According to John Madrid, “This is very personal to me and to Keith, not just because Keith was a main event contender, but because we know the fighters involved on a personal level. We know many of the fighters through Jackson’s MMA and forged friendships with the others as a result of this experience. We feel personally responsible and plan to do whatever it takes to prosecute these guys. As of Monday morning the U.S. Secret Service has taken an interest in the case, which is good news for us and bad news for Tim Fields, Bob Fill, and anyone else directly tied to the promotion.”

UFC veteran Keith Jardine had this to add, “Our ultimate goal at this point is to obtain the hard drive and the rights to the Nemesis fight footage. Despite the unfavorable circumstances, all 24 fighters on the card honored their commitment. They fought their hearts out and put on one hell of a show. There were some really amazing fights on this card. If we are able to obtain the fight footage, we plan to air the show via internet PPV in an effort to compensate the fighters that were taken advantage of.”

Both Jardine and Madrid sent personal messages to the fighters that were affected and their families. Below is an excerpt from Jardine’s email.

To all of the fighters that fought on the Nemesis fight card: I understand that none of the fighter’s checks from Nemesis were valid today.  I’m very sorry.  I know all of the sacrifices that it takes to complete a training camp.  I also understand that after realizing the grim situation at the fights everyone went and fought anyway.  That is a true fighter’s spirit.  Fighters fight and that’s what we do, no one else can understand that.  With that, the show was incredible and I’m very proud to be a part of it with all of you guys…. Again, I am so sorry.  I feel very low right now because I know some fighters stuck with this promotion because I was on the card..  That is very humbling and I will do my best to make some good of this situation.

Buentello has been the victim of unethical foreign promoters not once, but twice in 2010. It is time for the MMA community to take a stand and make it known that taking advantage of fighters that put their heart and soul into this sport, will result in more than just a slap on the wrist.

Earlier this week, during an exclusive interview with MMAWEEKLY radio, Jardine spoke publicly for the first time about the Nemesis fiasco. Please click on the following link to listen to the interview in its entirety: MMAWEEKLY Radio-Jardine Nemesis Interview.