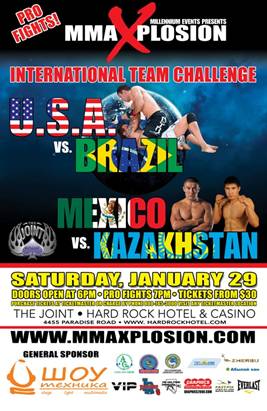 Teams from United States, Brazil, Mexico, and Kazakhstan to compete

Las Vegas, Nevada (USA): Millennium Events is proud to announce its next MMA Xplosion: International Team Challenge event, which will take place on Saturday, January 29th, 2011 at the Hard Rock Hotel & Casino. Some of the world’s best will showcase their skills as athletes from the United States, Brazil, Mexico, and Kazakhstan will form four national teams that will compete against one another at this incredible event. At the Challenge, Team USA will square off against Team Brazil, and Team Mexico will clash with Team Kazakhstan. Two of MMA Xplosion’s brightest rising stars, Damien Knight and Casey Johnson will be featured amongst the six fighters who will represent Team USA. Brazilian favorites Vitor Vianna and Vinny Magalhaes are just two of the talented competitors looking to further elevate the reputation of their native Brazil at the Challenge. Team Kazakhstan will once again be representing their country with the two Nazarov brothers, Ardak and Beibit, as they team up to face Team Mexico, which will include the ultra-tough Art Ramirez. In addition, a super female fight attraction between local favorites Michele Gutierrez and Karina Hallinan has been arranged, and is expected to be one of the most entertaining fights of the night.

Tickets for this event start at $30, and are on sale now at the Hard Rock Hotel & Casino Box Office, (702) 693-5222, www.hardrockhotel.com or www.ticketmaster.com. The event is open to all ages. Doors open at 6 PM, and the first match is scheduled for 7 PM.

In the main event of the evening, Brazilian stud Vitor Vianna (8-1) will look to once again display his devastating finishing skills as he faces off with multi-time IFL veteran Bristol Marunde (12-6). Vianna, a member of Wanderlei Silva’s Team Wand, has already made an impact in MMA Xplosion, as he has produced two overwhelming first round victories in his first two appearances with the promotion. Throwdown’s Marunde has faced very tough fighters throughout his career, including well-known fighters such as Shane Primm, Jordan Smith, Benji Radach, Matt Horwich, and Rich Attonito. He will certainly provide a stiff challenge for Vianna, as these two will put it all on the line for their countries and the Xplosion fight fans in the main event.

The co-main event will feature another outstanding competitor who’s been on a run in Xplosion in Damien Knight (3-0). In his last two Xplosion appearances, Knight has showcased his skill set in convincing wins over Travis Bartlett and UFC veteran Scott Junk, who he moved up in weight to face. He will represent the Team USA’s 205 pound weight division against highly-regarded Brazilian Jiu-Jitsu black belt Vinny “Pezao” Magalhaes (4-5). “Pezao” has won two of his last three fights, and is well-known for his time in the UFC, where he faced Eliot Marshall and top star Ryan Bader. The matchup between Knight and Magalhaes has far-reaching implications, and will surely bring out the best in both talented athletes.

Several other notables will be featured at this International Team Challenge event. Explosive talent Casey Johnson (1-0) will endeavor to continue his MMA Xplosion winning streak against undefeated Brazilian Pedro Munoz (3-0). Also representing Team USA will be dynamic fighters John Wood (10-5) and Chidi Njokuani (4-1), a young star who is the brother of multi-time WEC veteran Anthony Njokuani. In addition, Team Kazakhstan’s Ardak Nazarov, Beibit Nazarov, Kazybek Ashimov, and Begnar Ammanbyev, who put on an extremely impressive performance at the Joint on October 9th, will look to build off that momentum as they tangle with Team Mexico. And two of MMA’s top fight teams will be represented, as Greg Jackson fighter Karina Hallinan (3-3) will face off with Michele Guiterrez (4-2), a member of Team Wand.

“January 29th will be our first in a series of exciting MMA Xplosion promotions at The Joint planned for the year ahead,” stated promoter Vlad Warton. “Given the benefit of experience from our past three events in 2010, we are very proud to continue our association with the Hard Rock Hotel & Casino. I firmly believe that our positive working relationship with their venue will ultimately result in MMA Xplosion obtaining strong national and international brand recognition. We are totally committed to delivering the best of mixed martial arts content to our fans, and I wish to thank our fans and sponsors for their ongoing support.”

Warton’s business partner Rani John stated, “We have high expectations in building on the foundation MMA Xplosion has established, and plan on delivering top quality shows with top quality athletes for all of 2011.”

Fight card is subject to change. For more information, please visit our website at http://www.mmaxplosion.com/