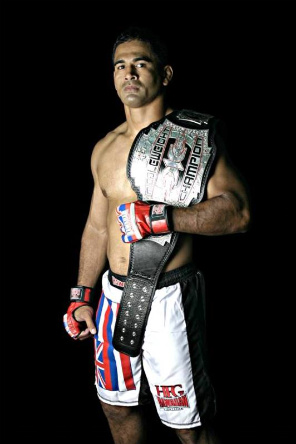 There isn’t much that Falaniko “Niko” Vitale (28-9) hasn’t seen during his mixed martial arts career. Whether it’s stints with the UFC, Strikeforce, or International Fight League, or fighting the likes of Matt Lindland, Yushin Okami, or Robbie Lawler, Niko has been there and done that.

Still, even with all he’s accomplished, Vitale wants to get one more shot with one of the major promotions to show what he can do, and he’s willing to make the move to 170 if necessary.

A lifelong athlete who wrestled in high school and played college football at Snow College in Utah, Vitale found MMA the same way many of his generation did, watching Royce Gracie use Brazilian Jiu Jitsu to dominate the early UFC competitions.

“I saw this little buy beating all of these bigger guys, and that made me want to get into Jiu Jitsu,” Vitale said.

Niko later made the transition into MMA, though he hadn’t planned on making such a long run.

“After each time I fought, I told myself I’d just do one more fight and then that’d be it,” he joked. Eleven years later and the Hawaii native is still going strong.

Vitale most recently held onto the X-1 middleweight title with wins over Kala Hose and Kalib Starnes. On both occasions, Vitale won by submission using an ezekiel choke modified to work without the gi. Niko calls it a “fist choke” and credits his large hands with making the move possible.

“It’s a similar set up as the ezekiel choke, but instead of using a gi, I grab my forearm and apply the pressure with my fist,” Vitale told ProMMAnow.com, crediting Eric Kiahi, a former Royce Gracie pupil, for helping his grappling game.

Looking back on his career, Niko has been involved in some epic battles, so it’s hard for him to pick which fights stand out.

“All of my fights that went to decision were tough,” said Vitale, who’s only had to go the distance seven times, going 4-3 in those instances.

Of course, leaving it to the judges won’t always mean the better man wins. In 2007, Vitale lost a controversial split decision to Jeremy Horn in the IFL, but his most peculiar loss came later that year in a four-man, one-night Strikeforce middleweight tournament.

His opening round opponent was fellow UFC veteran Trevor Prangley. Niko controlled things in the first round, but after some back-and-forth action in round two, Vitale suffered a poke to the eye.

As a result, officials called a halt to the bout. And to make things worse, with the judges deadlocked, referee Marco Rosales picked the winner and gave the nod to Prangley.

But the positives have far outweighed the negatives in Vitale’s career and he hopes to get another chance in a large promotion such as Strikeforce or the UFC.

“I still want to compete and I really want to fight in one of the bigger promotions,” Vitale said. “I think I just need a couple more wins and then I can get a chance. I’m just trying to make a run and see how far I can go with it.”

Although he’s never dropped down to welterweight before, Niko is currently walking around in the 190-pound range. He’s willing to fight in either weight class to get the best opportunity, but moving to welterweight would mean not having to deal with the size and reach disadvantage Vitale often faces at 185.

“Some guys at 185 are a lot bigger than me,” he said. “The game has changed so much from when I started and so many guys are cutting weight. And I think it’ll be easier for me to get better fights at 170.”