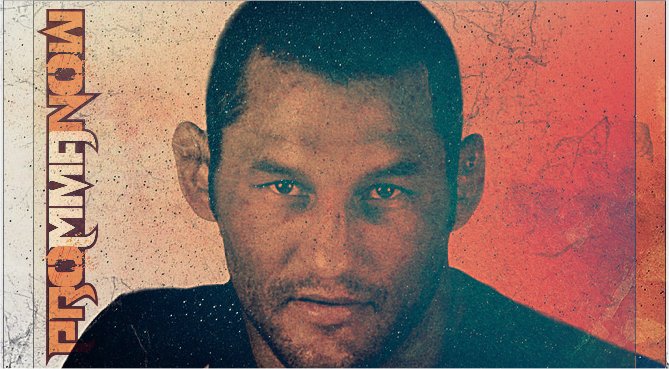 ST. LOUIS – It was a rematch 10 years in the making. It was a fight that wouldn’t see the second round.

Dan Henderson admitted later that he was a little shocked that it was time for his main event bout with Renato “Babalu” Sobral so soon, but once he hit the cage, he continued the precedent of early finishes from the fights before his.

Henderson needed less than two minutes to find a home for his big right hand, and once he did, “Babalu” was sent reeling to the canvas trying to find a leg to hold on to for survival. It was not to be, as Henderson stood over the open guard of “Babalu”, and delivered a three punch combo that rocked Sobral, forcing the referee to intervene and call a stop to the bout at 1:53 of the first round.

The performance was a far cry from the Henderson that fans saw against Jake Shields, and it was obvious that the trip back up to 205 made a huge difference.

“My body felt better than it has in a long time,” Henderson said. “I was trying to be patient. I knew it was going to come. It was just faster than I expected.”

Henderson (26-8 MMA, 1-1 SF) is now thick in the hunt for a title shot at 205, but has not ruled out the possibility of fighting at middleweight.

Daley shows Smith what “Semtex” is

Strikeforce newcomer Paul Daley has said that he is the best striker at 170, and that Scott Smith was not in the same league as him on the feet.

It proved to be very true.

Daley executed a perfect display of striking, mixing in stinging leg kicks and arrow straight combos, until he needed his big weapon- the left hook. After stunning and backing up Smith with a couple of short left hooks, the dangerous “Hands of Steel” came plodding forward with a big right hand. Daley took one step to his left and delivered an epic left hook that dropped Smith where he stood, completely unconscious.

It was a stunning finish, and Daley plans on delivering more of the same, calling out K.J. Noons after the fight as his next victim, and setting his sights on Nick Diaz after that for a title shot.

“Nick’s the champ, and I’m going to be the champion,” Daley said.

The win moves Daley to 26-9-2 overall, and 1-0 in Strikeforce, and marks his seventh win in his last 8 fights.

Matt Lindland’s credentials as both an Olympic silver-medal wrestler, and MMA legend are well known, but his decision to stand and bang with Robbie Lawler proved to be a devastating one.

Lindland has in the past been very adept at dodging big shots, and he did early, but after coming forward and eating a jab from Lawler, Lindland countered, and so did Lawler, with a crushing right hook that dropped Lindland.

Lawler followed Lindland to the mat and delivered a final shot that put Lindland to sleep. Lawler hesitated and looked for the referee, who was very slow to step in and stop the fight.

Afterward, Lawler said he had a feeling that Lindland would try to stand with him, but was still somewhat surprised when he did.

“I really didn’t expect him to stand with me,” an exasperated Lawler said after the fight.

“Bigfoot comes back, takes Kyle out

Mike Kyle who fights at both heavyweight and light-heavyweight, came into this fight on a week’s notice, and gave up 40+ pounds against Antonio Silva.

Mike Kyle came out like a man possessed, and caught Silva with a devastating right hand that sent “Bigfoot” crashing to the mat. The next 4 minutes were a true beating, as Kyle delivered big hammerfists, and punch after punch to the jaw of the big man.

“Bigfoot” kept his cool and maintained his composure throughout the onslaught, and in the second round it was a totally different fight.

Silva came out in the second stanza, worked Kyle to the ground and nearly finished the fight with a tight anaconda choke. Kyle found a way out of trouble, but as he worked to retain guard on his back, Silva stood over him and delivered a brutal ground and pound barrage, quickly forcing an end to the bout.

Silva (15-2 MMA, 2-1 SF), now has his sights set on a heavyweight title shot in 2011, and when asked about Strikeforce heavyweight champion Alistair Overeem, his response was simple.

St. Preux proved that he has some “stand and bang” in him as well.

St. Preux punished Radach over a lopsided three-round affair, that started with a bang, as St. Preux rocked Radach with huge left hands that forced Radach to turtle and cover up once on the ground.

St. Preux delivered several minutes of ground and pound from the top, landing dozens of unanswered blows, but somehow the referee let the fight go on, as Radach did little to stop the onslaught as he covered up looking to survive.

The second round was much the same, with St. Preux continuing to dominate the heavy-handed Radach. After more ground and pound to finish out the round, both guys entered the third and final round visibly fatigued.

Radach finally let his hands fly in the third, rocking St. Preux and forcing him back and into the cage, but after a short flurry, Radach dropped levels and hung on to the legs of St. Preux on several occasions.

Radach managed a late take down toward the end of the fight, but did little to threaten St. Preux as the bell sounded on the fight. Once the judges came back with a decision, it was as lopsided as has been seen on any recent cards.