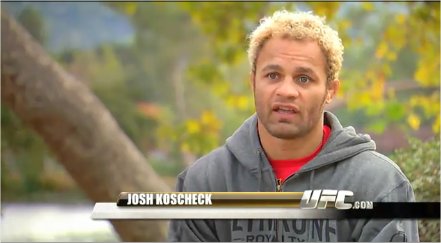 UFC 124 is still a couple of weeks out, but the trash talking has been nonstop, although one-sided, as Josh Koscheck has tried every trick in the book to get under the skin of UFC Welterweight champion Georges St. Pierre on the latest installment of The Ultimate Fighter.

Both fighters, as coaches on season 12 of The Ultimate Fighter, have had plenty of time to exchange pleasantries, but despite the verbal assaults launched continuously by Koscheck, St. Pierre has responded almost every time with nothing more than a smile.

As composed as GSP seems on the show, those close to him say he is fed up with the trash talk and cannot wait to unleash some good old fashioned aggression against the outspoken Koscheck.

Koscheck believes that he is a better fighter this time around and says that St. Pierre will see a more tenacious and complete Josh Koscheck when they step into the Octagon for the second time.