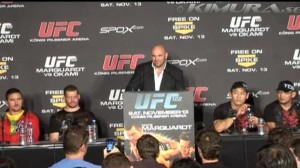 White confirmed that Okami would still get the middleweight title shot against the winner of Anderson Silva and Vitor Belfort, but he was far from impressed by the performances of Marquardt and Okami.

It was not all bad news though. White was proud of the German fighters on the card, especially Dennis Siver, who scored a first round rear-naked choke submission over the very talented Andre Winner. “Siver looked like a superstar tonight in his home country,” said White. 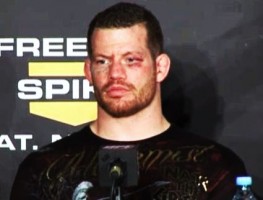 White announced that 8,421 people attended UFC 122 at Konig Pilsener Arena for a live gate of $600,000.  He also announced the traditional fight night bonuses and said the bonus winners would each be awarded $60,000.

Main event winner Okami said he would like to fight current middleweight champion Anderson Silva next and hopes Silva defeats Vitor Belfort at UFC 126 on Feb. 5 so the fight can take place.

After a couple of defeats, co-main event winner Dennis Siver said he changed up his training and started concentrating more on jiu-jitsu and wrestling and is pleased with the progress he has been making. His winning the UFC 122 “submission of the night” proves to him he made the right choice.

White mentions the next European country they are looking to go to is Scandinavia. He also mentioned France, China, India, Brazil and Italy, as places of interest.

A reporter told Marquardt that as a spectator he was not used to seeing him back up in fights and asked  him if he was feeling okay coming into the bout. Marquardt said,

“I felt ready and had a great camp and even in the fight I felt like I was landing the harder shots. When he was catching me, it wasn’t really affecting me, but the judges perceived it as he was controlling the fight. I felt I did enough to win but I wasn’t a spectator, I was in the fight so it’s hard for me to say. But either way, I’m still one of the best and I’m going to get back in there and be the champ one day.”

Another reporter asks Marquardt, “Were you surprised at all when you couldn’t get off those combinations you are famous for?”

With a look of surprise, Marquardt replies,

Krzysztof Soszynski said he is pretty sure his hand is broken and hurt it at the end of the second round of his unanimous decision win over Goran Reljic. He said the hand was on fire during the third round and couldn’t feel it and was just swinging away trying to finish the fight.

Soszynski also said he felt his conditioning made the biggest difference in his victory and he is still developing as a fighter. Once he can start becoming more accurate with his punches, finding the chin more instead of the upper part of his opponent’s head, Soszynski said he will start knocking more people out.