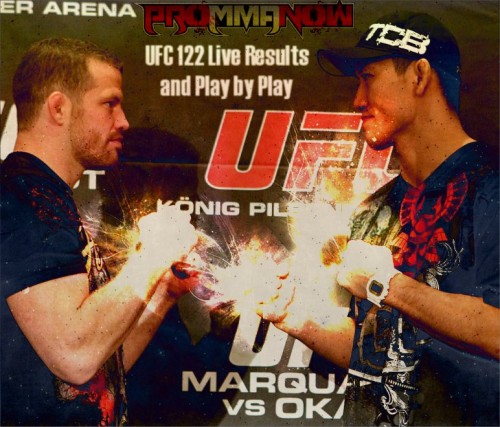 “UFC 122: Marquardt vs. Okami” takes place today at the Konig Pilsener Arena in Oberhausen, Germany. Headlining the event is a middleweight top contender fight between Nate “The Great” Marquardt and Yushin “Thunder” Okami.

Check out the ProMMAnow.com UFC 122 staff picks to see our thoughts and predictions on each fight.

Fight card update: the scheduled UFC 122 middleweight co-main event bout between Alessio Sakara vs. Jorge Rivera will not take place. It is being reported that Sakara became ill with flu-like symptoms just hours prior to the fight and had to pull out .

Round 1 – Ferreira goes for a single, pulls guard, they scramble back to the feet, clinched. Exchange of knees. Ferreira tries to get a takedown but Vlad backs out and starts an exchange of punches. Leg kick from Ferreira and he dives for the leg. Vlad avoids it and they clinch again. Vlad gets the takedown and lands a big knee. Vlad stands up lands a big punch and some elbows. Ferreira turtles up, Vlad gets full mount and pounds Ferreira to a pulp, forcing the stoppage. the crowd boos for some reason, not sure why…not for lack of excitement that’s for sure. Rogan thinks maybe it’s because some of the punches hit Ferriera in the back of the head. Maybe they just don’t like Russians. :)

Round 1 – Leg kick from Rocha and McCray gets the takedown, Rocha reverses and ends up on top in side control. McCray gets to his feet, they clinch, he gets the takedown and lands in side control. Rocha gets to his knees, they roll and McCray has his back with hooks in, landing some punches. Rocha gets to his knees, rolls for a knee bar, he’s got it tight and McCray is forced to tap out. McCray is very disappointed and is in  a lot of pain. Rocha really hyper-extended the knee, it was nasty. That really sucks for McCray…those are so dangerous. Big win for Rocha’s UFC debut.

Round 1 – Vemola gets the takedown early, lands some shots before Petruzelli gets to his feet. Vemola hunts him down, grabs him and picks him up for a power slam. Petruzelli throws up his legs for a triangle but Vemola breaks out, drops a punch, then puts himself in Petruzelli’s guard. Vemola with the ground and pound inside the full guard. Vemola is very strong and aggressive. Petruzelli goes for an armbar. Vemola escapes, and Seth gets to his feet. Vemola tries to take his back, Seth falls to teh ground and Vemola is back inside his guard. Seth throws up his legs again looking for a sub but Vemola continues with his ground and pound attack. Seth covers up his face but he gets hurt with some big shots from punches and elbows.  Seth is bleeding and the ref stops it.

Round 1 – Reljic got a takedown ended up on top at the end. I got a late start on the play by play so missed this round but all the judges gave the round to Soszynski.

Round 2 – Body kick from KSos but Reljic fires back with a body kick and gets the takedown. Ref stands them up. Leg kick from KSos. Jab from Reljic and KSos puts him against the cage, clinched. Reljic turns it around and puts KSos against the cage. KSos turns it back around and Reljic drops levels looking for a takedown. KSos stops it and pounds on Reljic’s kidneys and the crowd boos. KSos turns it around and they exchange knees like a tribal dance. Head kick from Reljic is blocked. KSos pushes him against the cage as the bell sounds. Not a definitive round for either fighter but I would probably give Reljic the round due to the takedown and a solid body kick.

Round 3 – One, two punch from Reljic and KSos fires back but nothing landing too solid. Leg kick from Reljic, he shoots and gets stuffed. KSos pounding from the side has Reljic turtles. Reljic rolls, looking for a kneebar, leaves himself open and KSos continues landing big shots to his turtled opponent. Reljic rolls again for the kneebar but KSos defends it and postures over Reljic with big shots. Reljic gets up lands a punch but KSos fires back and lands a couple big punches. Reljic shoots and pushes KSos against the cage. KSos looking for a standing kimura. Lands a knee to the body, still going for the kimura, hits Reljic with punches and knees and raises the kimura trying to twist it. Reljic gets out, backs up as KSos chases him down, grabs the Thai clinch and Reljic drops to his back to avoid the knee of KSos. KSos is on top in half guard, pushes him near the cage and lands some hammerfists and punches to the face. KSos stands up and lands a bomb on the downed Reljic. ProMMAnow.com scores the round 10-9 for KSos.

Round 1 – Leg kick from Sadollah and Sobotta returns it. They clinch, Sadollah’s back to the cage. Sobotta swings and misses. Sadollah hunting him down, fires off punches, clinches, lands some knees to the thighs. Sobotta fires off a combo as he backs up. Head kick from Sobotta is blocked. Amir hunting, putting on the pressure with punches, leg kick, leg kick, leg kick. Sobotta with a head kick that’s blocked. Leg kick punch leg kick from Amir. Leg kick from Amir. Sobotta ducks a head kick and grabs a body lock on Amir from the back. Sobotta trying to jump on Amir’s  back. Amir trying to twist around, and does it and takes himself out of that danger. Sobotta grabs a leg, Sadollah grabs a body lock and stops the takedown. 45 seconds to go. sobotta grabs a single again. but Amir gets out and lands a knee to the body. Sobotta grabs the single again, puts a knee to the thigh. They break and Amir fires off punches and lands a front kick at the bell. ProMMAnow.com scores it 10-9 for Sadollah.

Round 3 – Sadollah goes right back to tearing up both legs. Spinning back kick misses from Sobotta but lands a left punch. Sadollah with another leg kick, jab, hunting Sobotta, switches stances, another leg kick. Sobotta looks confused by Sadollah’s attack can’t figure him out. Sadollah with another leg kick, punch, body kick and Sobotta catches the leg, they clinch. Sobotta drops levels grabs a single. Knee to the face from Sadollah and a leg kick as they separate. Punch from Sobotta scores. Sadollah with a leg kic, another one. Another one. I can’t believe Sobotta is even standing. Sobotta with a one two punch and a leg kick. Spinning back kick misses from Sobotta. Leg kick from Amir. One minute to go. Nice right from Sadollah. Leg kick Sadollah, then a combo of punches, front kick. Nice right from Sadollah, body kick, Thai clinch and a knee to the head. Body kick. I really want to see how many strikes Sadollah thew in this fight. ProMMAnow.com scores the round 10-9 and the fight 30-27 for Amir Sadollah

Round 1 – Okami pushing forward. Nate misses a leg kick, throws a one two. Okami shoots, gets stuffed and Marquardt goes for a guillotine but Okami is free and on his back with Nate in butterfly guard of Okami, switches to full guard, with one foot on the hip of Marquardt a la BJ Penn. Nate moves to half guard. No strikes have been trhrown, until now with an elbow attempt. Nate attempts another guillotine and Okami reverses him and ends up on top in half guard. Nate has a butterfly guard with one leg, foot on the hip with the other foot. Okami using some ground and pound, punches. Nate holds on, goes for a heel hook and they are on their feet. Okami inching forward using a jab, then a punch with the left. They lock up. Okami trying for a trip takedown, drops down for a double and puts Nate down with just ten seconds to go. Close round, ProMMAnow.com scores it 10-9 for Okami.

Round 2 – Wittman told Nate to stay away from the guillotines. Okami hunting backing Nate up. Okami shoots, Nate sprawls. Okami stalking and Nate shoots, gets a single but Okami gets free. This is a great match up of styles. Okami shoots but Nate stops it. Okami puts him against the cage, knee to the body. Knee from Nate. Okami goes for a trip takedown but ends up on his back against the cage. The crowd boos which is uncalled for  in my opinion in this fight. They are fighting. Leg kick from Nate. Left jab from Okami and he drops levels, trying to get it to the ground, Nate’s back against the cage. Nate showing good defense. Okami with a body lock, drops levels again. 1:20 to go in this round. Okami finally gives up the takedown attempt and backs up. They square up. Okami with a elft, then a  combo. Flying knee from Okami but gets caught with punch. Doesn’t seem to faze him. Okami lands a left at the bell. ProMMAnow.com scores the round 10-9 for Marquardt.

Round 3 – Okami hunting again. Left by Okami then a right jab. Nate attempts a body punch but not close. Nate misses with a few more punch attempts, he’s too far away ands does not seem to want to get close enough to clinch with Okami. Nate lands a right but Okami is hunting Nate down and Nate is tentative. Okami connects with a couple punches. Lands a couple more. Nate with a feeling left hab, as he keeps backing up. Okami with a one, two and nails Nate. Leg kick from Nate. Okami with the jab. Okami the one being the aggressor here. Two minutes to go. Nate lands a counter punch, his hands are very low. Right hand by Nate. Nate with the takedown after some dirty boxing. Okami gets right up. I would not give Nate any credit for that takedown at all. He took him down cause he was getting outworked on the feet. Left hand from Okami. Okami with the jab. 30 seconds to go. Leg kick from Nate. They clinch. Nate with a right hand after the bell. The crowd boos as the bell sounds. ProMMAnow.com scores the round 10-9 for Okami and the fight 29-28 for Okami.

NOTES: Nate Marquardt did not fight like he wanted to win the title. If he fights like this against Silva he will get murdered. Even though I picked Nate to win this bout, I’m very disappointed with his performance and I am happy for Okami, it’s been a long time coming.