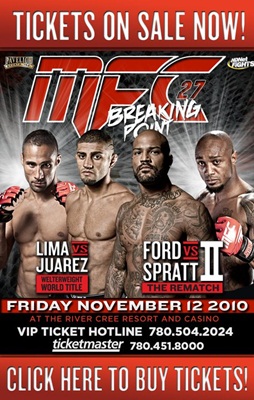 “MFC 27: Breaking Point” takes place this evening at the River Cree Resort and Casino in Edmonton, Alberta, Canada. The event is headlined by Jesse Juarez vs. Douglas Lima and co-headlined by Pete Spratt vs. Ryan Ford.

Round 2 – Lima with a leg kick and follows it up with punches. Fraser shoots and gets stuffed. Clinched against the ropes.Lima separates lands a big right hand and a front kick. Fraser catches a low kick, pushes Lima against the ropes after a flying knee that misses. Clinched in the corner with Fraser’s back to the ropes. Ref separates them and moves them to the center. Fraser with a leg kick and a punch. Lima with a punch to the body, then drops Fraser with a straight right hand. Fraser falls straight to his back with one big punch and doesn’t even bother nor need to follow up with punches. Right on the chin.

Round 1 – Both guys exchanging punches and both landing some decent shots, but Johnson shoots and puts Healy on his back. Johnson gets side control. Healy trying to reverse but is caught in a type of crucifix and Johnson is taking advantage with some short punches to the head of Healy and now using some elbows to Healy’s head. Johnson controlling very well from top and Healy is just in a terrible position. Finally Healy gets out of the crucifix and gives up his back. Johnson has a body lock and throws Healy back down as he stands up briefly. Johnson has his back with the hooks in. Healy gets to his knees and stands. Johnson still has a body lock from the back, they turn around and separate and start throwing punches. Healy shoots but it backfires and he ends up on his back with Johnson in half guard. Healy gets to his knees and Johnson starts landing several knees on his thighs. Thai clinch from Johnson and lands some big knees as he pulls Healy’s head down. ProMMAnow.com:  Jack scores it 10-9 for Johnson. 10-8 for Johnson from  Buhl.

Round 2 – Healy shoots after an exchange of punches. Ref stops the fight and makes Healy put his mouth guard back in. Tells him he will take a point next time. Leg kick from Healy. Johnson throwing punches and lands a high kick. Healy shoots but Johnson stuffs it and gets a body lock behind Healy. Knee to the thighs from Johnson. Healy locks on a standing kimura but gets slammed on his face by Johnson, followed up by several punches on the downed Healy. Johnson mounts him and starts landing punches, takes his back, flattens him out, goes for a rear-naked choke but lets it go. Still pouncing from the mount is Johnson. Healy rolls to his side briefly. Johnson moves to side control and is just dominating Healy something awful. Healy gets to his knees and Johnson takes his back. Healy escapes and gets to his feet. Johnson gets a trip takedown and has side control. Healy is looking like an amateur in this fight. Johnson has just swarmed him. ProMMAnow.com: Jack sores it 10-8 for Johnson. Buhl scores it 10-8.

Round 3 – Healy catches a kick and puts Johnson down. Johnson gets right up and starts swinging but Healy catches him with  a shot, rattles him, and Healy goes for a guillotine choke but Johnson slips out. Healy on top inside his full guard. Ref stops the fight because of Healy’s mouthpiece. No point taken. They put Healy back in guard. Johnson gets out, reverses and ends up on top in side control. Johnson has Healy’s back with both hooks in, looking for the choke. Healy rolls to his belly. Elbows from Johnson. Healy gets back to his back and Johnson is in full mount. Johnson back to side control. Healy throws a couple elbows from the bottom. He gets to his knees and now to his feet. Healy starts swinging, lands a right, a knee. Johnson gets a big takedown with seconds left to go. Great heart shown by Healy but he got spanked. ProMMAnow.com: Jack Scores it 10-9 Johnson, Buhl 10-9 Johnson.

Round 3 – One round each. Wallace lands a left hook and a short right, shoots, gets a single leg, lets it go as Heath lands a knee to the bread basket. Clinched, they separate and square up. Body shot from Wallace. Leg kick from Heath. Left hook from Wallace, then a leg kick. both guys land a few little light punches. Looking like a sparring match at the moment. Body shot from Wallace then a front kick. Head kick from Heath stops the boos momentarily. Wallace shoots, grabs the single leg and puts Heath on his back. Wallace with some punches to the head from top position in half guard. Heath gets out from underneath, gets to his knees. Wallace takes his back as Heath turtles. They roll to their backs as Wallace has his back. Heath reverses and ends up on top inside Wallace’s guard. Shoulder strike and a couple punch attempts from Heath as the bell sounds. ProMMAnow.com scores: Jack scores the round 10-9 for Wallace and the fight 29-28 for Wallace. Buhl scores the round 10-9 for Wallace and the fight 29-28 for Wallace.

Round 2 – Leg kick from Al-Hassan. Lewis finally checks a leg kick. Razak lands another one though and Lewis looks frustrated. Razak lands another one and Lewis fires back with a punch. Razak clinches, knees to the thighs from Razak.Punches to the ribs from Lewis. Al-Hassan using knees still and the ref calls time and tells them they need to pick up the action. Leg kick from Hassan. Lewis lands a left punch. He swings with a right that misses. Leg kick from Al-Hassan gets caught, then they clinch. Lewis finally gets a takedown from the clinch, now on top in half guard. Lewis gets mount with half a minute to go. Al-Hassan just hanging on but Lewis lands a few elbows and punches and the crowd goes wild. ProMMAnow.com scores: Jack scores it 10-9 for Lewis, Buhl socres it 10-9 for Lewis.

Round 3 – Leg kick from Al-Hassan. Lewis fires off punches countering Razak’s kick, they clinch. Lewis gets backed into the corner and Al-Hassan working knee strikes to the thighs. Lewis trying to out-power him but Al-Hassan gets a takedown and is on top inside guard. Lewis trying to look for a kimura. Al-Hassan pounding on the body. Lewis catches Al-Hassan sleeping, and locks on an armbar. Al-Hassan escapes it and Lewis gets to his knees in turtle position. Razak takes his back with a little over a minute to go. Lewis trying to get to his feet, he rolls for a kneebar attempt but ends up on his back with Razak inside his guard. Ref calls for action. Lewis throws up his legs looking for a triangle but Razak escapes it and throws punches as the bells sounds. ProMMAnow.com scores: Jack scores the round 10-9 for Al-Hassan and the fight 29-28 for Al-Hassan. Buhl scores the round 10-10  and the fight a draw.

Round 1 – Both guys bouncing, both swing and miss. Leg kick from Spratt knocks Ford off balance. Ford tries to clinch, throws a  punch that misses. Huge leg kick from Spratt. Spratt shoots and ends up on top in side control. Ford bucks up but Spratt hangs on landing some small punches. Ford gets up, chases after Spratt, eats a left hand. Spratt turns Ford to the corner, they split up and square up again. Big leg kick from Spratt. Spratt gets a big takedown and lands on top in half guard. Ford bucks but can’t get Spratt off. Ref calls for Spratt to work. Spratt postures up, lands some punches but gives Ford a chance to get to his feet. High kick from Ford. Spratt gets a takedown as Ford looks for a guillotine. Spratt’s head pops out and Spratt is on top as the round ends. ProMMAnow.com scores: Jack scores it 10-9 for Spratt, Buhl scores it 10-9 for Sprat..

Round 2 – Leg kick from Spratt. Spining round kick from Ford misses. Spratt with his hands down and Ford launches in with a right that misses. They clinch and Ford lands a big knee right to the groin that makes a loud pop. Ref calls time out. The clinch in the corner. Ford puts Spratt on his back in the corner. After a few GNP shots as Ford postured up, Spratt tried to turn out, eventually Ford gets the hooks in, Spratt fought off the first RNC attempt but Fford stayed on his back and sunk it in the second time and forced the tap.

Round 1 – Leg kick for Lima. Juarez shots in and slams Lima on his back. He picked Lima up high and dropped him hard. Juarez postures up with some punches and elbows. Juarez inside Lima’s guard in the corner. Lima’s head on the bottom rope. More elbows and big shots from Juarez. Lima with a closed guard and Juarez staying busy with less than two minutes to go. Antonio McKee in Juarez’s corner. Lima lands a couple elbows from his back. Lima bleeding a little. Lima throws his legs up looking for a submission. Nothing there. Lima with wrist control. Juarez with punches to the body and face as the bell sounds. ProMMAnow.com scores: Jack scores it 10-9 for Juarez. Buhl scores it 10-9 for Juarez.

Round 2 – Juarez shoots as Lima swings. Lima stuffs it but Juarez keeps driving and puts Lima on his back as the bounce off the ropes. Lima throws his legs up but nothing there. Juarez inside the guard again using occasional punches. Ref calls for action. Ref has seen enough and stands them up. Juarez shoots immediately and puts LIma down but Lima goes for a lazy guillotine and Juarez easily slips out of it and is on top inside Lima’s guard. Lima throws up his legs for a triangle but Juarez is free of it and back inside full guard. Hammerfist from Juarez. Ref stands them up. They kick each others feet in mid air. Juarez shoots, Lima sprawls and Juarez puts him down anyway. ProMMAnow.com scores: Jack scores it 10-9 for Juarez. Buhl scores it 10-9 for Juarez.

Round 3 – Lima with a high kick and a leg kick. Juarez with a high kick then shoots, pushes Lima against the ropes. Juarez puts Lima on his back. Lima fires off punches and elbows from his back. Lima locks on an omoplata but Juarez gets out. Lima transitions to a triangle, Juarez slides out and goes back to ground and pound from the guard. Lima locks on a very tight triangle and an armbar at the same time. About halfway through the round and Jesse Juarez taps out. Juarez got sloppy and lazy inside the guard and paid for it. He escaped the first few attempts this round but Lima kept at it, waited until he got sloppy and Douglas Lima becomes the MFC welterweight champion. The slow-mo shows Juarez tapped out to the armbar but he was also caught in a triangle position.