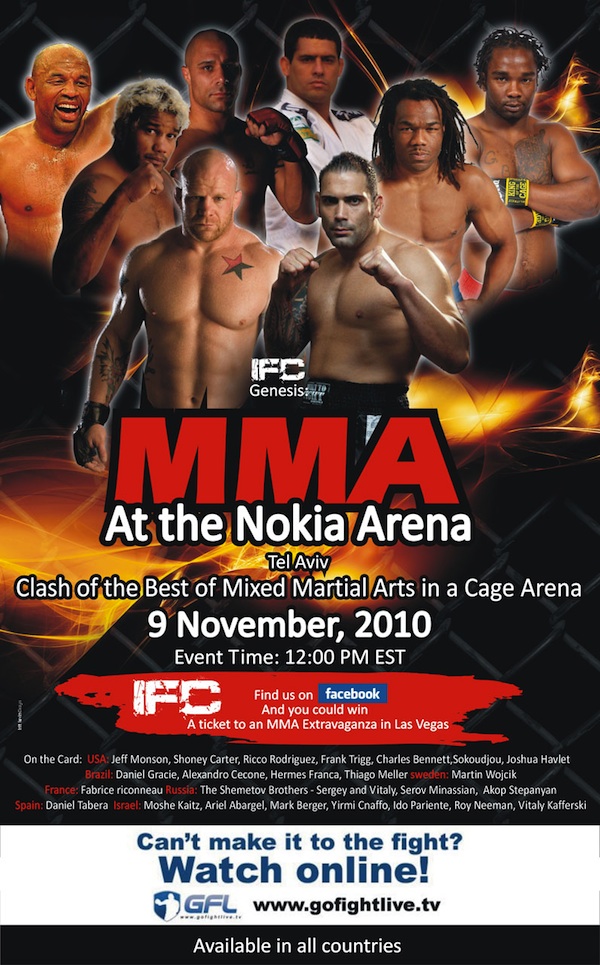 Israel Fighting Championshp: Genesis takes place today at Nokia Arena in Tel Aviv, Israel. The event features a number of Israeli fighters testing themselves against some of MMA’s top competitors. Jeff Monson, Ricco Rodriguez, Frank Trigg, Hermes Franca, Shonie Carter and Rameau Thierry Sokoudjou are some of the big names on this card.

Round 1 – Leg kick by Gracie. Again. Right hand from Wojcik. Gracie misses with another leg kick and Wojcik fires back with a one-two. Head kick from Wojcik, does not connect solid. Gracie fires back with punches and gets the takedown. Gracie in side control and gets Wojcik’s back with one hook in. He locks on the choke and Wojcik taps out.

Round 1 – Sokoudjou walks out to “Kung-Fu Fighting”. The commentator called Soko one of the best first round fighters in the world. That’s a pretty good description. A few boos due to the long feel out period. Ref calls them in and tells them to fight. Not a punch thrown yet, two minutes in. Leg kick from Soko. Soko slips to the ground after a failed head kick attempt. Pocevicius pounces with punches, then they clinch. Soko takes Pocevicius down with a judo throw and is on top in half guard, with Pocevicius trapped against the cage. A couple of big elbows from Sokoudjou. Pocevicius tries to get up. Sokoudjou tries to lock on an Americana but Pocevicius escapes and gets to his feet, grabs a single leg. Sokoudjou lands some elbow then goes for a standing kimura. Pocevicius still looking for the leg, Sokoudjou trips him down, but Pocevicius gets up until Sokoudjou drops him with some big knees and gets on top as the bell sounds. ProMMAnow.com scores it 10-9 for Sokoudjou.

Round 2 – Another long feel out period. Almost one minute in, still circling. Exchange of leg kicks, Sokoudjou fires back with another big one, then clinches, lands a knee, another. Pocevicius throws a punch and Sokoudjou takes him down and lands in full guard. Soko stands up and dives in with a big right hand. Pocevicius gets to his feet and they square up. Another feel out period. Soko swings, misses, Pocevicius slips to his back and Sokoudjou gets on top in half guard. ONe minute to go. Soko landing some elbows still on top in half guard. Soko lays on top until the ref stands them up, he does look tired. ProMMAnow.com scores it 10-9 for Sokoudjou.

Round 3 – Another round, another feel out period. Another minute in. The boos start as we are almost two minutes in and nothing has happened. Leg kick from Pocevicius. The commentator says he doesn’t know why the crowd is booing, says this is hard work. That’s funny. Leg kick from Sokoudjou, again. Big right from Sokoudjou. Pocevicius ducks and they square back up. 1:30 to go and about four strikes have been thrown. Leg kick from Sokoudjou. Pocevicius tries to return one but misses. 40 seconds left. Soko is clearly trying to ride this out, knowing he is ahead on the cards. Soko ends the fight with three kicks and the fans roar with boos. Of course Pocevicius was the one who needed to engage more. This is the danger of placing no named guys against established veterans. The commentators can’t believe the crowd is booing Sokoudjou.

Round 1 – Franca has turquoise hair. Kaitz gets a takedown and goes for a leg lock. Up kick by Kaitz as Hermes is hovers over him. Franca gets out of the leg lock and lays on top inside Kaitz’s guard. Kaitz uses elbows and palm strikes from his back, he throws up an armbar then transitions to a leg lock. He gets Hermes on his back and stands above him with punches. Kaitz is a Royler Gracie black belt by the way. Kaitz lands more punches from the top then tries to taked Hermes’ back, transitions to armbar but Hermes stands up and eats an up kick. Hermes lays on top, lands a nice elbow. Kaitz has butterfly guard and holding on to Franca. Franca throwing some weak shots from the top but not doing much at all except maintaining position. ProMMAnow.com scores the round for Kaitz 10-9.

Round 2 – Head kick and spinning back kick from Kaitz, then a big left jab. Israels has some serious fighters no doubt about it. And I think more than anything this is a showcase for them. Kaitz attacks with punches and knees and puts Franca against the cage. Kaitz grabs a single leg and goes for a takedown , then succeeds with a trip takedown. He jumps on Franca’s back but slips off. They square up again. Kaitz lands a nice one-two punch then takes Franca down easily. Franca looks tired. Kaitz hovers as Hermes is on his back. Hermes turtles up and Kaitz tries to take his back but slips off. Franca on top. Kaitz with butterfly guard. The crowd chants “Moshe”. Franca in half guard. Franca throws an elbow before the bell. ProMMAnow.com scores it 10-9 for Kaitz.

Round 3 – Franca runs out to meet Kaitz. Leg kick from Franca. Again. Again. Kaitz initiates the clinch and pushes Franca against the cage. They separate and square up. Nice punch from Kaitz then a big leg kick. Franca lands a big uppercut that rocks Kaitz and he pulls guard. Kaitz holding him tight. Nice left hand from Franca from on top in half guard. He passes to side control. Kaitz regains half guard but Hermes stands up and calls Kaitz to stand. Hermes gets full mount and is landing some elbows. One minute to go. Kaitz hangs on as Franca pushes his head back and lands another big elbow. Ten seconds left. ProMMAnow.com scores the roudn 10-9 for Hermes Franca but if we’re scoring like we have to we have to give it to Kaitz. Pride rules would give it to Franca. Hermes thinks he won.

Round 1 – They said Neeman is normally a lightweight. Both guys feeling out with jabs. Trigg standing straight up. Both throw kicks. Inside leg kick from Neeman. OMG. the commentator just called Trigg the former PRIDE mw champ. Trigg attacking with combinations of punches. Front kick to the body from Neeman. Leg kick from Trigg. Trigg landing several punches, grabs a Thai clinch, lands a knee. Trigg drops Neeman with  punches. Neeman gets up but Trigg puts him on his back and lands some big shots while standing over him. The ref stops it  A much needed TKO win for Trigg. The commentators talk over Trigg’s post fight interview so we can’t hear anything he says. They did say he wanted to keep the fight standing. Trigg doesn’t know what is next.

Round 1 – Our good buddy Sergey Shemetov is taking on a legend in the sport here. Sergey will have a huge advantage on the feet but Monson will have the significant ground advantage. If you don’t know this site’s (ProMMAnow.com) history with the Shemetov brothers, a simple search will solve that. Sergey’s brother Vitaly lost earlier in the evening. Two big leg kicks from Sergey but Monson catches the second and puts him on his back and has side control. Monson’s leg looks very red from those kicks. This is NOT where Sergey wants to be. A couple of right hands to the body from Monson and knees to teh body over and over and over from Monson. Sergey is just eating these knees but Sergey holds Monson’s arm to prevent Monson from looing for a submission. Monson still in side control and continues with the big knees. Sergey smiles at the knees with a big grin. Monson obviously did not want to stand with Sergey and continues with the knees strikes to the body. Sergey holding on still. The commentator mentions that Monson’s leg is very bruised from the two kicks early in the round. One minute to go. Monson goes for an Americana and Sergey taps out.

NOTE: Monson says he is dropping to 205 lbs. That is a pretty big announcement. UFC bound? He may be too much of an anarchist for the UFC.

Round 1 – Ricco is wearing old school boxing trunks. Ricco checks a leg kick. Ricco misses with a head kick. Tabera with a low kick. Tabera with a spinning backfist attempt. Tabera’s hands are very low. Ricco checks another leg kick. Ricco shoots, gets a single leg, picks him up and puts him down. Tabera gets right to his feet but Ricco still has a body lock, picks him up and slams him down.  Tabera goes for a leg locks or knee bar. Ricco rolls and starts landing some punches that make Tabera release the leg. Ricco gets full mount. , Tabera gets half guard control, then full guard, closed. Ricco using ground and pound. The commentators just said they just said Ricco would be a  force at 205 in the UFC. ProMMAnow.com scores the round 10-9 for Ricco.

Round 2 – Leg kick from Tabera. Ricco clinches, lands some knees as he presses him against the cage. Ricco looking for the takedown, grabs a single, lifts his leg up and picks him up high for the slam. Tabera reverses and gets side control on Ricco. Ricco turtles up and Tabera holds on from the north-south position but is not doing ANY damage. Ricco gets to his feet. Leg kick from Tabera. Ricco looks exhausted. Ricco missed with and probably has a lot to do with his low gas tank. Tabera with a spinning backfist that misses and Ricco gets the takedown. Tabera’s stand up looks pretty horrible to be honest. He has a full guard on Ricco right now. Ricco with light punches to the ribs and head. ProMMAnow.com scores it 10-9 for Ricco.

Round 3 – Tabera runs around the cage to show he has cardio. Ricco attacks with punches and gets the takedown. He lands in side control, elbow to the side of the head. Tabera escapes and gets to his feet. Ricco grabs a Thai clinch, lands some knees and Tabera escapes and lands a couple punches. Lazy leg kick from Tabera. Ricco gets another takedown, looking for the full mount. Two minutes to go in the fight. Ricco in half guard. Commentators think Tabera is giving Ricco too much respect. Tabera gets full guard and Ricco is landing occassional body shots and punches. Tabera grabs Ricco’s neck in a guillotine but has not near enough strength to pull it off. Ricco slips out. Tabera reverses as the bell sounds. ProMMAnow.com scores the round 10-9 for Ricco and the fight 30-27 for Ricco. Tabera’s corner lifts him up like he won and he raises his hands … maybe just happy he went the distance.

NOTES: Ricco says he would like to come back to Israel and fight Monson at 205 lbs.