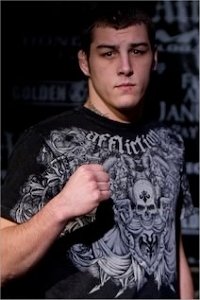 The main event is a grudge match between Dan “The Upgrade” Lauzon (13-4-0), who remains the youngest UFC fighter ever, against Damien “The Omen” Trites (5-3-0) at a 165-pound catch weight. The 22-year-old Lauzon, fighting out or Reality Self Defense, is the younger brother of UFC lightweight contender Joe Lauzon (18-5-0), who fights George Sotorupoulos on UFC 123 (Nov. 20 at Auburn Hills, Mich.). Trites, representing Wai Kru in Boston, has won three of his last four fights.

In the co-main event, Bellingham (MA) lightweight Mike “The Beast” Campbell (8-3-0) attempts to get back on the winning track against Detroit invader Tony “Lion Heart” Hervey (12-8-0).

“This is our third MMA show and it promises to be the best by far,” CES MMA promoter Jimmy Burchfield said. “We’re improving each show in order to give fans what they want – action and compelling match-ups. Lauzon and Trites don’t like each other and that’s certainly going to show in the cage. Campbell’s ready to bounce right back from a disappointing loss on our first show, also at Twin River, but he’s going to have his hands full with a tough veteran like Hervey. Mat Santos kept MMA alive in this state and we’re excited to have him back fighting with the opportunity for him to avenge a controversial loss against Silva. Our matchmakers are rounding out the remainder of what promises to be a power-packed undercard for our last show of 2010.”

All bouts feature three, five-minute rounds. Undercard fights will soon be announced. All fights and fighters are subject to change.

(Twin River has waived its 18+ rule for “Snow Brawl.” Anybody under the age of 18 must be accompanied at all times by an adult and they must enter through the West entrance.)