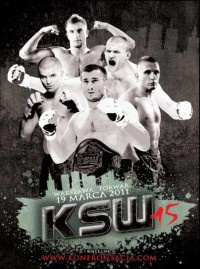 At the moment we can confirm the first few top Polish fighters who will compete on the card. KSW 15 will feature the fighter who is arguably the top European middleweight, Mamed Khalidov. Also competing will be two-time KSW tournament winner Jan Blachowicz and KSW middleweight champion Krzysztof Kulak against yet to be named opponents.

Maciej Gorski will battle Finnish standout Niko Puhakka in the KSW 15 lightweight tournament final. The event will also mark the return of Polish MMA veteran and Moosin fighter, Lukasz Jurkowski, who last fought in Poland more than a year ago at KSW 11.

Opponents and additional fights will be announced soon. However, we can ensure all KSW fans that the fight card for the 15th Martial Arts Confrontation will be a stellar one.

The KSW 15 Pay-Per-View will be available for purchase on ipla.pl.