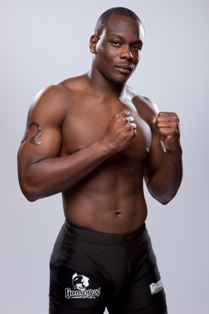 NEW YORK (Oct. 29, 2010) – Streaking former University of Tennessee linebacker Ovince St. Preux (7-4), of Knoxville, Tenn., who is coming off an eight-second knockout victory, will seek his fifth consecutive conquest inside the distance when he faces Antwain “The Juggernaut’’ Britt’’ (11-4) of Virginia Beach, Va., in a light heavyweight (205 pounds) bout during a terrific STRIKEFORCE Challengers event on Friday, Nov. 19.  The evening of fights will take place at Jackson Convention Complex in Jackson, Miss., LIVE on SHOWTIME® at 11 p.m. ET/PT, (delayed on the West Coast).

Unbeaten 155-pounder Ryan Couture (1-0) will face an opponent to be determined on the televised undercard. The son of legend Randy Couture won his STRIKEFORCE and MMA debut with a 1:15, first-round submission (triangle choke) over Lucas Stark last Aug. 13 on STRIKEFORCE Challengers.

The Mixed Martial Arts (MMA) fight card is presented by Rockstar Energy Drink and will mark STRIKEFORCE’s initial foray into the state of Mississippi.

Tickets are on sale at all Ticketmaster outlets, including the Coliseum box office and Be-Bop Record Shops, by phone at 800-745-3000 and online at Ticketmaster.com and www.STRIKEFORCE.com.
St. Preux, who fights out of Knoxville MMA, has won all four of his fights this year in the first round in total elapsed time of 7:10.  He called it a night after demolishing tough UFC veteran, Jason “Dooms’’ Day, with a single punch in just eight seconds in his most recent outing last July 24.

Day came out hard, charging St. Preux at the opening bell and throwing a hard left hook. St. Preux avoided the shot and landed a crushing, thunderous uppercut that floored Day. He immediately followed up with more punches, forcing the referee to step in and halt matters.

The victory was the second in a row for St. Preux since he won his STRIKEFORCE debut with a 0:47, first-round TKO (punches) over Chris Hawk last April 17 in Nashville. Shortly thereafter, St. Preux signed a multi-fight deal with STRIKEFORCE.

St. Preux is a 6-foot-3, 27-year-old who played for the Vols from 2001-2004. After graduating with a degree in Sociology in ’04, he became heavily involved in MMA, utilizing his impressive wrestling skills and natural athletic abilities. He made history on Feb. 20, 2009, by not only competing in Tennessee’s first sanctioned MMA event, but also by recording the first knockout.

“Everything is going good now but, the more I win, the harder I know I have to work,’’ St. Preux said.  “I fought some tough guys early in my career because it didn’t matter to me who I fought. Looking back, I probably should have won all those fights. But I’m not mad because I learned so much from each of them.’’

After controlling Feijao for most of the standup in the first round, even buckling the Brazilian at one point, Britt got caught with an overhand right. He staggered backwards and Cavalcante followed him into the corner before unleashing a left hook and uppercut that forced the referee to stop the action at 3:45.

A member of Hybrid Academy of Martial Arts, Britt had entered the Cavalcante clash having won four of five, including an impressive, dominant first-round TKO over Scott Lighty on Dec. 19, 2009.

“This is a must-win fight for both of us,’’ said Britt, who has gone more than one full round only three times in a career that began in March 2007. “But I really want this bad. I thought I had Feijao, and would love a rematch with him especially since he now is the STRIKEFORCE champion.’’

Ribeiro is a decorated submission expert who won the Brazilian Jiu-Jitsu World Championship four times, once as a purple belt in 1996 and three times as a black belt in consecutive years (1999-2001). His 20 victories include 14 stoppages (12 by submission) and he has defeated, among others, such notable fighters as Joachim Hansen, Eiji Mitsuoka and Mitsuhiro “The Endless Fighter” Ishida.

Wilcox, a former NCAA wrestling star and bodybuilder, has won his last four starts. In his most recent outing on March 26, he registered a unanimous decision over Shamar Bailey at STRIKEFORCE Challengers in Fresno, Calif.

The younger Couture is a member of the Las Vegas, Nev., based Xtreme Couture fight team. Before impressively winning his pro debut, the 28-year-old compiled an amateur record of 5-1-1 with all five wins coming by submission.