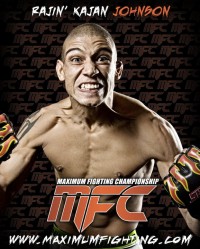 Opportunity has knocked. Kajan Johnson has answered. Now it’s just a matter of whether the House of “Ragin” is the right address.

Eyeing greater heights in his career, Johnson (17-11-1) faces a must-win situation at MFC 27: Breaking Point as he takes on highly regarded Brazilian Orestes Betran (13-4). The encounter is one of the featured matchups on the HDNet Fights-televised main card emanating from the River Cree Resort and Casino on Friday, Nov. 12. With doors opening in the MFC’s lightweight division, Johnson has a deep desire to step up and solidify himself as a real player and resident in the 155-pound ranks, and not as a mere gatekeeper.

“I see this as a huge opportunity and I have to thank the MFC for giving it to me despite the fact that I am coming off a loss,” said Johnson. “The chance to fight on TV means more people will know about me and realize what I am trying to become – MFC world lightweight champion.”

In order to start his quest towards the goal of wearing championship gold, Johnson threw out his old game plan and created a new one. The first chapter in the new book was taking his training camp on the road to Las Vegas and training at the Extreme Couture camp – a gym that Johnson eventually hopes to call his home though that will all depend on his performance at MFC 27.

“It was amazing training at Extreme Couture. I felt I had to do so because I feel like I have outgrown Vancouver,” explained the Burns Lake, B.C., product. “Most of the good guys around here have either retired, moved away or are just not motivated to train all the time. I am planning to move to Las Vegas to become part of Extreme Couture early next year.”

And as Johnson fine tunes the final preparations to face Betran, he has come to figure out that despite a solid record with a reputable list of opponents, he is now expecting more out of himself at a critical point in his career.

“This is definitely the best that I have been,” Johnson added. “What’s scary is that I haven’t even come close to reaching my full potential. I believe that I am at the top of the division. I don’t see anyone in it that will pose a great threat to me.

“Sorry if that offends anyone but if it does I am willing to back up everything that I say.”

Johnson has backed up bold claims for much of his career, scoring 10 of his 17 career wins via submission, and winning five of his last six fights heading into the matchup with Betran. The Brazilian is not the typical mixed martial artist from his home country, however, as his sharp stand-up skills have earned him nine of his 13 career wins by way of knockout. Betran will ride a three-fight winning streak into his MFC debut and he has won six of his last seven outings.

Johnson has the added incentive of not only trying to win to get on pace towards a title shot but also to erase the memories of his last MFC performance – a below-expectations loss in the first round to Ryan Machan. Johnson would much prefer to follow-up on his last effort under the Heat XC banner which generated an impressive second-round TKO of jiu-jitsu standout Josh Russell.

“I have had an intense 13-week camp and I’m fully prepared for battle,” noted Johnson. “In this fight, I will prove to the viewers of the MFC that I am the top lightweight in the division and no one will stop me.

“I know that Betran is a good fighter. I have seen his record and tapes. He is very aggressive and likes to come forward. That’s perfect. I love fighting this style of opponent … it is my absolute favorite. I know it will be a lot of fun and exciting for the crowd to watch.”