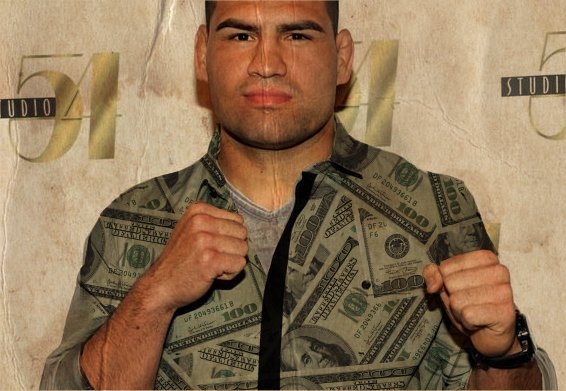 Velasquez not only dethroned Brock Lesnar, but did it in style earning the night’s “Knockout of the Night” award, while Roberts picked up the “Submission of the Night” bonus, and Sanchez and Thiago battled for “Fight of the Night” honors.

It was a double victory for AKA stand out and new UFC Heavyweight Champion Cain Velasquez. Not only does he walk away with UFC gold after destroying Brock Lesnar, he also adds $70k to his checking account as well.

Velasquez patiently defended against a furious onslaught from Brock Lesnar, as the the former champion came out of the gates like a bull possessed, running across the cage throwing knees (even a flying knee), before taking Velasquez to the canvas.

Velasquez calmly made his way back to his feet twice after being taken down, then got a take down of his own, and blistered Lesnar with shots from the top. It was the beginning of the end for Lesnar, after Velasquez put Lesnar on his back again, and began raining down huge punches from the top, forcing referee Herb Dean to step in and stop the fight, earning him the title and the bonus for “Knockout of the Night.”

Roberts earned his bonus by quickly locking up a guillotine choke, before switching to a fight ending anaconda against Mike “Joker” Guymon, after a slip by Guymon put him at a positional disadvantage. The submission was slick, it was quick, and it gave Roberts a cool $75k for “Submission of the Night.”

Diego Sanchez was coming off of back-to-back losses, and unfortunately for Paulo Thiago, “The Nightmare” returned in full form tonight. After a lackluster first round, Sanchez found his mojo in the second frame, taking Thiago for a ride before slamming him to the canvas in the second round, erupting the crowd into a frenzy. Sanchez would maintain dominant positions throughout, and although Thiago went for multiple submissions from his back, it was Sanchez who kept a relentless attack and unstoppable pace, turning the fight not only into a unanimous decision victory, but “Fight of the Night” as well.