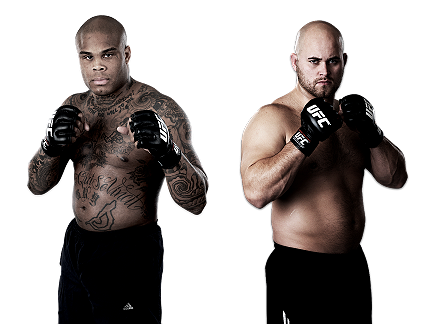 Gilbert “The Hurricane” Yvel‘s transition into the UFC has been, how shall we say… less than stellar. UFC President Dana White gave the bad boy a shot despite his reputation for bad behavior and it has not worked out. It is safe to assume if TUF 10 veteran Jon Madsen defeats him this Saturday at UFC 121, Yvel is done in the big show.

Yvel has been fighting a long long time. And he may have the absolute best percentage for finishing fights in MMA. With 36 wins on his record, all 36 were stoppages, 31 by knockout, five by submission. That is remarkable. But it is his next stat that is causing the trouble, his losses.

Admittedly, his losses have been against top tier talent since arriving in the UFC in January 2010. At UFC 108 he was stopped in the first round via TKO by Junior Dos Santos and then in June at UFC 115  he lost a unanimous decision to Ben Rothwell; two formidable and highly respected fighters, but two losses nonetheless.

This puts him in a do or die situation against the undefeated Jon Madsen. A loss against Dos Santos is forgivable. A loss to Rothwell is completely understandable. But a veteran of Yvel’s caliber has no business losing against Jon Madsen, and that is not a knock on Madsen, it is just a fact that he is still a babe in the sport.

This is the biggest fight of Madsen’s career. A win for him here proves he is ready to start facing that next level of talent and will be a huge feather in his cap as our friend Joe Rogan so often likes to say.

When I interviewed Jon Madsen last year he had been living in the dorms at the H.I.T. Squad and training with former UFC welterweight champ Matt Hughes and the gang. Despite the high level of teaching and training he had access to there, the one thing lacking was enough other big heavyweights to train with.

That is certainly not an issue for this fight. Madsen has been training with MMA’s number one heavyweight team in the world at the Death Clutch camp in Minnesota, alongside fighters such as UFC heavyweight champ Brock Lesnar, who happens to be headlining this card.

Also on the Death Clutch team are guys like Bellator heavyweight champ Cole Konrad and Chris Tuchscherer. Not only is Madsen working with a group of the biggest guys in this game, he is also working with some of the best wrestlers this sport has ever seen.

Since debuting in the UFC at the TUF 10 Finale in December 2009 with a split decision win over Justin Wren, Madsen has won unanimous decisions over both Mostaphal Al-Turk at UFC 112 in April and Karlos Vemola at UFC 116 in July.

Considering Madsen was a Division II National Champion and a three-time All-American wrestler for South Dakota State University, combined with the fact he is now part of the Death Clutch death camp, Yvel’s chances of not getting put on his back in this fight are about as slim as Paris Hilton on a five-week crack binge.

Madsen is a hard puncher too, but no question Yvel will have the advantage on the feet. If Madsen gets too comfortable standing and gets lulled into some false sense of security he could very well get knocked out.

However, more likely what will happen is Madsen will stand with Yvel until he eats a few and realizes this is a different kind of striker and he needs to get this fight to the ground. He will get the takedown and then lay on some of that patented Death Clutch ground and pound.

It is going to be very hard to finish Yvel without a submission, so we will likely see Madsen beat Yvel up on the ground for the majority of the fight, taking home a unanimous decision, and thus putting a giant bald eagle feather in his cap.