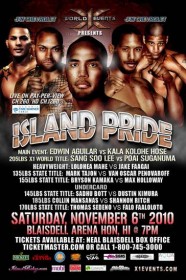 Honolulu, HI (USA): World class fight promotion X-1 World Events is proud to bring its next exciting fight card to Hawaii as they present “ISLAND PRIDE,” live on Saturday, November 6th, at the Neal S. Blaisdell Arena in Honolulu. This incredible night of action will feature local fight legend Kala “Kolohe” Hose in the main event, as he battles extremely tough and experienced Mexican fighter Edwin “Tigre” Aguilar. In the co-main event, the X-1 Light Heavyweight Championship tournament will come to a finish, as Island favorite Po’ai Suganuma and Korea native San Soo Lee will lock horns with the belt on the line. Also on the card will be Strikeforce fighter Lolohea Mahe, as he makes his return to X-1. Local fight fans won’t want to miss this night of bone-crunching KO’s, slick submissions, and electrifying finishes!

This event will also be shown live on Pay Per View on all inner islands. The undercard will begin at 5:30 PM, and the main card is scheduled to start at 7 PM. Ticket prices for “ISLAND PRIDE” include $35 for riser seats, $50 for floor seats, $70 for second row seats, and $100 for front row seats. Please see http://www.x1events.com/ for more ticket information.

Kala “Kolohe” Hose (7-4, seven KO/TKOs) is a fighter known for his devastating knockout power, and has garnered a reputation as one of the toughest Island fighters active today. In August of 2008, he claimed the ICON Middleweight title with an exciting TKO victory over current UFC fighter Phil Baroni that was lauded by MMA fans for its great action. A veteran of Superbrawl and EliteXC, Hose will look to rebound from a disappointing fourth-round submission loss to X-1 Middleweight Champion Falaniko Vitale during the most recent X-1 event, “HEROES.” During his career, he’s faced UFC veterans such as Baroni, Vitale, “Mayhem” Miller, and Reese Andy. Now, he will take on the ultra-tough Edwin “Tigre” Aguilar. This knockout specialist has claimed 16 of his 21 career victories via TKO/KO, and with “Kolohe” standing on the other side of the cage, someone is bound to get knocked out in this one!

In addition, X-1 fans will finally find out who the X-1 Light Heavyweight Champion will be, as the tournament will come to a close at “ISLAND PRIDE.” Former EliteXC headliner and Hawaii native Poai Suganuma (11-3) will tackle the challenge brought by extremely tough South Korean SpiritMC veteran Sang Soo Lee (15-9) with championship glory at stake. Suganuma defeated Greg Schmitt via unanimous decision in the first round of the tournament to advance to the semi-finals. There, he knocked out Vitaly Shemetov in just over a minute to gain a spot in the final round. Now he faces Lee for the belt. The Korean knocked out Daniel Madrid with a beautiful right hand in the opening round of the tourney, which allowed him to move on to the second round. In his second tourney fight, Lee took a unanimous decision victory over California’s Roy Boughton, which thrust him into the title finals. Now, Suganuma and Lee will tangle to show who the real champion is.

“ISLAND PRIDE” is also proud to present a returning local favorite in Lolohea Mahe. Mahe is coming off a two-fight stint in Strikeforce, and is looking to rebound in the promotion that helped launch him. A two-time X-1 veteran, Mahe is determined to prove he belongs on the big stages of MMA. In addition, “ISLAND PRIDE” will present two state championship fights, with the 155 lb., and 145 lb. state title belts all on the line.

“What an incredible night of fights this should be!” exclaimed Mike Miller, Owner/Promoter of X-1 World Events. “We’re proud to bring back Kolohe, who has a tough task on his hands with ‘Tigre’ Aguilar. Then we finally get to see who the next X-1 Light Heavyweight Champion will be, and we’re also glad to see Lolohea Mahe back in X-1. Local fight fans are in for an awesome night!”

Here is the fight card as it stands now: