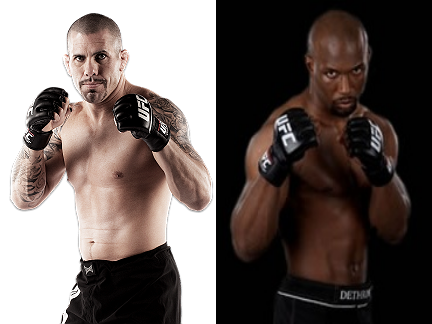 Both Michael “The Joker” Guymon and Daniel “Ninja” Roberts debuted with the UFC in 2010 and both are 1-1 in the organization. Despite the surface similarities, these two athletes are vastly different. As the former King of the Cage welterweight champion, Guyman fought at the professional level ten years before he ever saw the inside of the UFC Octagon.

Prior to coming to the UFC, he had spent the last few years teaching mixed martial arts at Joker’s MMA Academy and fighting in the smaller organizations where he put together an impressive 11-2-1 record.

In Guymon’s UFC debut at Fight Night 20 in Jan. 2010 he was matched against the much younger Rory MacDonald, a well-rounded and undefeated Canadian who was also making his promotional debut.

Whether it was a result of his much publicized emotional troubles, first time UFC jitters, whether MacDonald was simply a better fighter, or a combination of all these things, Guymon ended up getting submitted via armbar 4:27 into the first round.

After finally getting to the UFC after all these years it was a disappointing first loss and would have been even worse if he had been cut from the organization. Fortunately, he was not cut and the UFC brought him back four months later to take on Yoshiyuki Yoshida at UFC 113 in May. Guymon got the unanimous decision victory and it was Yoshida who ended up getting the axe.

Roberts turned professional in September 2007 and spent the next two-and-a-half  years putting together a 9-0 record in Oklahoma. In March of this year he made his UFC debut at “UFC on Versus 1” against John Howard, who was coming into the bout undefeated (3-0) inside the Octagon.

Roberts was an NCAA All-American, a NAGA champion and an ADCC medalist. He is a difficult match for anyone on the ground. However, Howard was able to keep it on the feet and knocked him out two minutes into the first round.

“Ninja” Roberts regrouped and was invited back in July of this year to face veteran Forrest Petz at UFC 116. Petz was making his return to the organization after a nearly three year absence in which time he put together a 5-2 record. It was a close fight but Roberts ended up grinding out a split decision victory.

BetUS.com has the following odds for this fight: Mike Guymon +125, Daniel Roberts -155

“Joker” Guymon is going to be the more well-rounded fighter going into this bout. If Roberts is able to get him down, Guymon can certainly threaten with submissions, and on the feet the fight certainly favors Guymon.

Roberts will be the faster and more athletic fighter but the only way he likely wins this fight is via submission, and I don’t think that will happen against Guymon. I could see Roberts trying to stand with Guymon and getting taken out via TKO in the second or third round.

Take a look at these other previews of the UFC 121 Prelims:

Stay tuned for more previews of the UFC 121 Prelims.