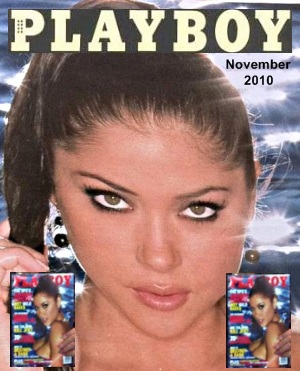 The highly anticipated November 2010 issue of Playboy featuring UFC ring girl Arianny Celeste was released (at least in some markets) on Friday. Immediately, scanned images of the bare naked beauty were posted online, much to the displeasure of Arianny who posted her feelings on Twitter, even threatening legal action against the MMA website which published the photos: 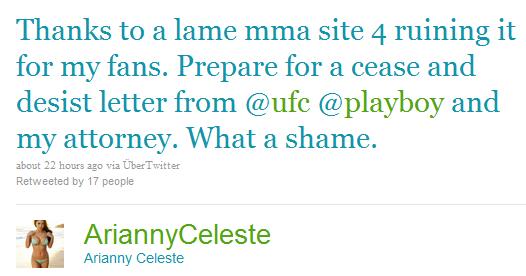 “Thanks guys! Its coming down..sorry I’m kinda upset..about to take it out on my punching bag..haha have a good day!”

“Not gonna lie its odd knowing ur fam can see u in a pb mag, but I would never do anything my fam didn’t approve. …”

The website which had originally posted the photos has since taken them down. I personally stopped by a Borders yesterday to see if they had it but they still had not received the November issue and had October’s issue with Sasha Grey on the cover still on the shelves. Evidently it is available in some places and not available in others, so you may want to call your local bookstore first if you plan to go pick it up just to make sure it’s in.

By the way, I did get to see the photos before they were taken down, and on a scale of 1-10, they are an 11; very sexy, very classy. In one of the photos she is completely nude, oiled down and lifting a pair of dumbbells with a TON of weight on them and she’s posed mid-lift in a curl and doesn’t even appear to be straining. It’s actually quite impressive. Do yourself a favor and go pick up the November 2010 issue of Playboy.