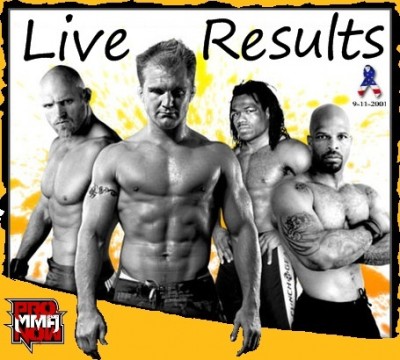 Shark Fights 13 takes place this evening, Saturday, Sept. 11, at the Amarillo Civic Center in Amarillo, Texas. The card is absolutely stacked and headlined with a light heavyweight bout between Shark Fights 205 lb. champ Trevor Prangley (22-6-1) taking on Keith Jardine (15-8-1), who is making his first non-UFC appearance in over five years.

In the co-main event PRIDE and UFC veteran Rameau Thierry Sokoudjou (9-6) goes up against the heavy-handed Houston Alexander (10-6), who exploded on the MMA scene in 2007 when he knocked out tonight’s headliner Keith Jardine in just 48 seconds at UFC 71.

Round 1 – Larson with a record of 32-4 according to announcer. Saffiedine much less experienced. Two south paws. Coors Light sponsoring the show. Larson chasing but gets caught with a shot and goes down very briefly. Saffiedine with a high kick and a right hook, the clinch briefly but square up again. Stiff right by Saffiedine. Larson playing the counter game right now. Larson shoots as Saffiedine comes in, pushes him against the cage. Gets hold of a single leg. Larson falls to his back and tries to lock up a heel hook. Saffiedine attacks with punches on top inside half guard. Larson trying to cover up his face as Saffiedine throws right hands. Larson controlling the wrist. Saffiedine gets free of the grip, lands a couple shots. 29 seconds to go in the round. Saffiedine stays busy with nothing getting through. 10-9 for Saffiedine.

Round 2 – Bas Rutten and Don Frye are hilarious as commentators along with Ron Kruck, the voice of reason. Frye thinks Larson is “under the weather”. Saffiedine connects with a right. Leg kick from Saffiedine, goes back to walking Larson down. Larson looks tentative. Saffiedine with a flying knee and Larson grabs a single. Larson hangs on to the leg but not able to do anything with it. He drops low for a moment, then stands back up, still holding the leg. Crowd boos. Saffiedine escapes the single leg. Leg kick Saffiedine. High kick just over Larson’s head. Nice right from Saffiedine and Larson fires back. Larsen looks tired, lands an overhand left. Right hand from Larson. They clinch. Separate. They swing before the bell but nothing lands. I give the round to Saffiedine 10-9.

Round 3 – Leg kick Saffiedine. Left hand Larson. Big right hook connects on Larson’s chin and staggers him for a second. Saffiedine lands a nice combo and Larson tries to shoot, gets stuffed. Saffiedine is going just over Larson’s head with a high kick. A few inches lower would KO him. Larson shoots, gets a single leg in his grasp. Saffiedine puts some elbows in his back. Larson goes low and Saffiedine gets on top, lands several punches in half guard. Less than two minutes to go. Saffiedine punishes from on top. Larson in defense mode. Larson halfway looks for a kimura but can’t get hold of it. Saffiedine stays busy the whole time ands dominated the round and won the fight.

Round 1 – Daley came in over weight and had to forfeit 10% of his purse. Get ready for some fireworks. Leg kick Daley. Again. Body shot Daley. Daley attacking. Body shot Daley. Daley walking Masvidal down, slips to the ground but gets right up. Lands a left hand. Leg kick Masvidal. Daley lands a shot. Masvidal goes for a single leg, gets poked in the eye. Ref stops it for a moment. Big leg kick from Daley. Leg kick Masvidal. Daley with a monkey kick, misses. Masvidal gets the takedown. Daley uses butterfly guard and gets up. Left hook Daley. Left hook Daley. Masvidal seems a bit tentative on the feet. Daley shoots, lets it go. Daley with a nice combo. Masvidal grabs a Thai clinch. Daley gets that round 10-9.

Round 2 – Daley just seems much more confident on the feet. Leg kick Masvidal. Daley leg kick. Right hook from Masvidal. Body shot then right hook from Daley. Masvidal catches a leg, puts Daley on his back and is on top in half guard. Daley gets up, they trade knees to the body. Masvidal shoots, gets the takedown. Daley with his back against the cage trying to get up. And does so. Still clinched. Masvidal grabs a single, Daley defending and gets free. Knee to the body from Daley. Nice straight left to the chin from Masvidal, then gets the takedown, on top in Daley’s full guard. 40 seconds to go in the round. Ref stands them up. Ten seconds to go. Nothing. Masvidal should get that round 10-9.

Round 3 – I can’t believe all these fights going to decision. Daley the aggressor. They trade jabs. Left hook from Daley. Nice right from Masvidal, then shoots, gets a single and puts Daley on his back. Masvidal’s hands are actually pretty good and seems to be throwing Daley off his game. Daley trying to get off his butt right now with his back to the cage. Daley talks the referee into a stand up. Daley lands a straight right and then a body shot. Daley acts like he knows he needs to turn it on. Daley can’t seem to find his rhythm or range. Masvidal grabs a single, gets him down but Daley is up and catches Masvidal with a shot. Daley comes in with a flurry but nothing lands. Ref stands Masvidal up. Right hand from Daley. Daley shoots, gets stuffed. Ten seconds to go. Daley gets the takedown and throws a flurry before the bell sounds. Daley probably won it right there at the end. Masvidal did very well but I think he may have let Daley steal it. 10-9 Daley, 29-28 for the fight for Daley.

NOTES: Whoah… Paul Daley just made himself look like a real ass. The crowd was booing him and he said, “The difference between me and them (the crowd) is I’m getting paid a hell of a lot more than they are. So thank you for buying your tickets and paying my way.” That’s a paraphrase but that’s the gist of it.

NOTES: Okay if this fight goes to decision I will pull my beard out. Houston says he’s bringing back the “Old style that people are used to seeing. What’s old is new.” Not sure what that means but hopefully it means he won’t run in circles doing leg kicks.Sokoudjou has a six inch reach advantage.

Round 1 – Houston misses with a leg kick but eats one in return. Crowd chants “Houston”. Leg kick Houston. Thierry swings, misses and lights his leg up with a kick. Sokoudjou knocks him back with a body kick. He drops Houston with a huge punch. Houston grabs a single leg and eats about 15 huge shots to his face while holding on. Sokoudjou trips him to the ground, Houston gets to a knee and back to his feet. Soko swings and misses. Houston puts his hands up, he’s still here. Soko drops him with another shot but Houston is back up. Soko shoots and puts him down on his back. Houston Alexander is a tough sonofabitch. He’s taken some shots that would have stopped most any man. Soko gets reversed and Houston is on top inside his full guard.Houston  is throwing big punches from inside the guard. He lands at least one good shot. He even head butts Sokodjou in the chin. Sokoudjou gets the round 10-9 but it was a helluva round and comeback for Houston. The ref warns Houston for the head butt.

Round 2 – Crazy crazy first round. Straight left from Houston, then a leg kick. Soko looks tired. Left hook from Soko. Fans chant “Houston”. Three big rights from Houston. Sokoudjou crumbles to the ground against the cage. Houston Alexander starts raining down punches. He throws probably 100 punches before the fight is stopped.  Don Frye just said Houston could run for mayor of Amarillo tomorrow and he would win. Soko is still down. This fight was stopped pretty late. This was the best comeback of the year. Bigger than Lesnar’s comeback against Carwin and bigger than Silva’s comeback against Sonnen in my opinion. Houston got hit with some very very hard shots. It could have  been stopped and I don’t think anyone would have complained. Then he comes back and puts Soko out. Sokoudjou is up and is okay.

Round 1 – This fight has a very hard act to follow. Check out our interview with Prangley from last week. Prangley is the champ but this is not a title fight. Huge leg kick from Jardine. Leg kick from Jardine again. Jardine shoots and eats a knee. They clinch. Jardine grabs a single and eats a few uppercuts. Body shot Prangley. Big knee to the body, then a big knee to the chin from Prangley. Prangley hip tosses Jardine to the ground. Jardine throws up an armbar, trying to straighten it out. Prangley gets out and is in side control. The knee that Prangley hit him in the head with was BIG. Prangley puts some knees in Jardine’s ribs, gives him some elbows still in side control. Jardine gets full guard while Prangley works the body. Jardine goes for a leg lock. Prangley is out and up but looks tired maybe. Jardine with a big right hook and Prangley laughs. Jardine lands another shot. Prangley looks exhausted. Prangley gets the round 10-9.

Round 2 – It’s pretty cool to see Jardine using his ground game. Jardine’s cut is huge over his eye. Big leg kick Jardine. Jardine on his bicycle. Prangley looks flat footed, plodding. Leg kick Jardine, big one. Leg kick Jardine. Prangley misses with a counter punch. Prangley trying to counter, eats a big leg kick. Jardine calls Prangley forward. Jardine lands one on the chin. Prangley drops Jardine with a big shot. Jardine clinches up. They release and square up. Jardine seems okay. Big leg kick Jardine, another one. Prangley looks very calm. I thought he was tired but he may just be his style. Prangley misses a punch then throws a big back fist that misses. Jardine shoots a lazy shot, gets stuffed. Jardine gets a body lock, Prangley lands some short punches makes him let go and Jardine lands a punch as he backs out. Close round. I don’t even know who to give it to. I guess I’ll give it to Prangley. I think he landed the better shots and dropped Jardine. 10-9  Prangley.

NOTES: The crowd boos the decision. Five straight losses for Jardine. He sits against the fence and looks very dejected. Prangley asks everyone to take five seconds of silence for the victims of 9-11.