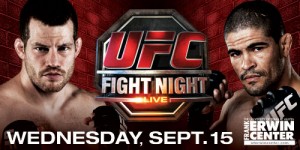 Heading into their Sept. 15 main event clash at UFC Fight Night 22 in Austin, Texas, middleweight contenders Nate Marquardt (32-9-2) and Rousimar Palhares (20-2) seem focused on the task at hand, remaining respectful of the other’s skills and not bothering with any trash talking.

Coming off of a decision loss to Chael Sonnen at UFC 109, Marquardt said he still aims to win the UFC title, but right now isn’t thinking past Palhares.

Although Marquardt has been a professional fighter for more than ten years, he admits that Palhares’s style — with his unorthodox striking, physical strength, and vicious submissions — offers a unique combination.

“I’ve definitely seen fighters with all different styles, though nothing quite like him,” Marquadt said. However, Marquardt believes his training partners have him prepared for whatever happens.

Nevertheless, with title aspirations and the spotlight of a main event, Marquardt isn’t nervous and doesn’t feel any more pressure than usual.

Asked whether he felt the need to not only win, but win impressively, with a showcase bout on national television, he responded, “The way I see it, I’m an exciting fighter, and I do look to finish fights. That’s what the fans want to see; that’s my style, so I’m not really worried about it … My number one concern is winning the fight.”

While Marquardt is looking to bounce back from a loss, Palhares dominated his last opponent, Tomasz Drwal, securing a heel hook submission in under a minute. But Palhares received a 90-day suspension for failing to let go of the grip after Drwal tapped and the referee came in to separate the two fighters.

Palhares, speaking through a translator, sounded contrite about the incident and insisted he did not intend to hurt his opponent.

Although Palhares relies on his submission game, he said that Marquardt’s own BJJ black belt could actually help Palhares. Other high level grapplers are usually more willing to engage in a ground war, he said.

Like Marquardt, Palhares faced questions about whether a win might put him in line for a title shot, but Palhares simply said that was up to the UFC and President Dana White.