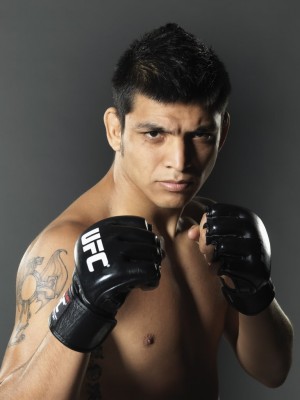 After winning his first 12 professional MMA bouts, The Ultimate Fighter Season 8 winner Efrain Escudero (13-1) tasted defeat for the first time, losing by third round submission this past January against Evan Dunham.

Escudero bounced back with a decision win over Dan Lauzon at UFC 114. Now with a Sept. 15 fight on the horizon against prospect Charles Oliveira at UFC Fight Night 22 in Austin, Texas, Escudero admitted that getting his first loss out of the way did relieve some pressure.

“Being undefeated puts a lot of pressure on you,” Escudero said Thursday during a UFC media call.

Escudero said that his cardio might have let him down against Dunham, but credited Dunham for capitalizing on his mistakes in that fight.

“I think I’ve gained a lot more from that loss than I would’ve gained from a victory,” Escudero said.

Various injuries caused Escudero’s Sept. 15 opponent to change several times before the UFC lined up Oliveira, but Escudero does not believe that the change in opponent will affect his performance.

“We’re going to make them fight our fight,” Escudero said. “We had to switch some things up,” he said of his training camp, but declined to give any details that might reveal his strategy.

Oliveira (13-0), speaking through a translator, also does not seem bothered by the late notice or the short turnaround time since his last fight. He only needed 41 seconds to defeat Darren Elkins in his UFC debut on Aug. 1. Because he made it through the fight without any damage, Oliveira had resumed training immediately and felt prepared to take the fight with Escudero.

Oliveira also acknowledged that he couldn’t pass up the chance to fight a high profile opponent such as Escudero in a televised bout.

“You want to fight with the best of the best [and] have to take [fights on] short notice sometimes,” Oliveira said.