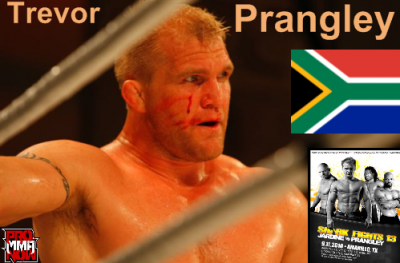 “Shark Fights 13” takes place this Saturday, Sept. 11, at the Amarillo Civic Center in Amarillo, Texas. Headlining the stacked card is a light heavyweight showdown between Shark Fights light heavyweight champion Trevor Prangley (22-6-1) and Keith Jardine (15-8-1), who would love nothing more than to use his opponent as a stepping stone back to the UFC.

Both guys are looking to get back on track. Prangley has gone 7-2-1 in his last ten bouts, dropping his most recent bout against Tim Kennedy via submission at ‘Strikeforce: Los Angeles” in June. Prior to that, he fought to a draw with Karl Amoussou after an accidental eye poke at “Strikeforce Challengers 6” in February. Jardine has gone 4-6 in his last ten and was released from the UFC in June after dropping four straight.

On paper Prangley should probably the favorite, but Jardine has never laid down for anyone. Prangley will have to take this fight from Jardine if he wants it. These types of fights are always interesting. You have Prangley who is in the upper echelon of the non-UFC fighters going against Jardine, who was just released because he wasn’t cutting it at that top level.

ProMMAnow.com spoke to Trevor Prangley this week to get his thoughts on fighting “The Dean of Mean” and what he is going to have to do to win this fight. Trevor also shared his thoughts on the idea of being a “stepping stone” for someone and gave some insight as to how long he would like to keep fighting.

Pro MMA Now: Thank you for taking time to speak with us at ProMMAnow.com. Here we are just a few days away from your fight against Keith Jardine at Shark Fights 13. Although you are the light heavyweight champ, apparently this is a non-title fight. Do you know what’s the reason for it being a non title fight?

Trevor Prangley: I am not sure why this is a non title fight.

Pro MMA Now: What is your opinion of Keith Jardine as a fighter and how do you see yourself matching up with him?

Trevor Prangley: I think Keith is a top level 205-pounder who has wins over some big names, I believe this will be a very competitive fight.

Pro MMA Now: Is there anything about Keith’s skills or maybe something from one of his fights that has really impressed you?

Trevor Prangley: I am impressed with a lot about Keith and think his most impressive attribute is his heart and will to fight. This truly makes a formidable opponent.

Pro MMA Now: What has your training been like for this fight, have you done anything special to prepare for Keith, and was it a good solid camp?

Trevor Prangley: I had a solid camp and am more ready for this fight than i have been in years.

Pro MMA Now: Who are you working with these days and who’s been helping you get ready for this fight?

Trevor Prangley: I work with all the guys at AKA (American Kickboxing Academy) man they are all so good it unbelievable.

Pro MMA Now: At this stage of your career what does this fight mean to you and how important is it?

Trevor Prangley: Every fight is important no matter what stage of my career I’m in. If I can beat Keith it will give me a huge boost going forward.

Pro MMA Now: Do you feel that Keith wants to use you as a stepping stone to try to get back in the UFC? If that’s his plan, what would you say to that?

Trevor Prangley: Of course he does and how can I blame him he wants to further his career just as I want to forward mine. We are both stepping stones in that aspect.

Pro MMA Now: What are you going to have to do out there Saturday night to get the win?

Trevor Prangley: To beat Keith I am going to have to do everything right there will be no place for mistakes and no second chances.

Pro MMA Now: You’ve been fighting professionally almost ten years. Is it still as fun as its always been, and how much longer would you like to keep fighting?

Trevor Prangley: Fighting will be a rush till I throw my last punch, only God knows how long I can keep going.

Pro MMA Now: Trevor, thank you so much for your time. Best of luck to you on Saturday. Would you like to thank any sponsors or send any shout outs? If so go right ahead.

Trevor Prangley: I wanna thank all my training partners at AKA and at Iron Lion Jiu-Jitsu in Coeur d’Alene. Fighting is a team sport and all good fighters have a good team behind them. Also wanna thank my family for all their sacrifices and can’t wait to get home and see them, also all my sponsors you guys are great, thanks for your continued support.