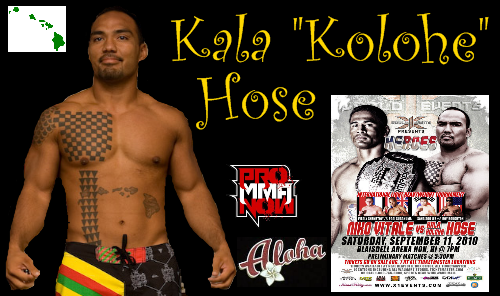 Kala spoke to us this week about how it feels to face a legend like”Niko” and what a win over him would mean for his career. Kala filled us in on why he’s been out of action so long and if he thinks the layoff has helped him. We also discussed MMA in Hawaii, why there is such a strong fighting culture there and who is Hawaii’s biggest MMA hero of all time.

Pro MMA Now: Hi Kala, thank you for speaking with us at ProMMAnow.com. We haven’t heard much about you here in the last year or so. Your last fight was in April 2009. How are you doing and what have you been up to?

Kala Hose: Over the pass year I took time off due to an elbow injury, so I just been healing and recovering.

Pro MMA Now: You had been fighting several times a year. Do you feel the time off has helped you and you will come back stronger or would you have preferred to have been more active?

Kala Hose: The time off I think made me smarter since I couldn’t be very physical I watch tapes and been more technical then just using power. I wanted to stay as active as I could but then again I got injured.

Pro MMA Now: This Saturday at X-1 you will be fighting seasoned veteran Falaniko Vitale. First of all, how is it going to feel to be back fighting in front of all your friends, family and fans in Honolulu? How will it feel to get back in there?

Kala Hose: I’m very pleased to be fighting in front of my hometown family, friends and fans since this is my first fight back. Hawaii fans is the best!

Pro MMA Now: Hawaii has always been known as an MMA haven and has produced some amazing fighters. The fans are very loyal to Hawaiian fighters more than any other state I think. As someone immersed in that culture, what one fighter do you think Hawaiians look up to the most and why?

Kala Hose: The one fighter Hawaii looks up to is B.J. Penn, he has accomplished so much in his career and was the one who put Hawaii fighters on the map.

Pro MMA Now: And then could you list the names of the Hawaiian fighters who are most loved and most represent that Hawaiian fighting spirit. In other words, who would you say are the heroes of Hawaiian MMA?

Kala Hose: If I had to choose fighters from Hawaii who are loved and represent Hawaii it would be B.J. Penn, Niko Vitale , Yancy Mederios and Brad Tavares because they have the fighting spirit, yet they are very humble.

Pro MMA Now: I would imagine Kala “Kolohe” Hose is one of those fighters most loved in Hawaii. I’ve heard that applause when you fight there and it’s amazing. What do you think it is about Hawaiian culture that produces that fighting spirit?

Kala Hose: Bloodline! That is why our culture produces the fighting spirit. Growing up in Hawaii, every day is a fight, it’s just the way we live.

Pro MMA Now: Okay, let’s talk about Falaniko Vitale. As a fellow Hawaiian, is he someone you have looked up to over the years and how will that affect you when you get in the cage with him?

Kala Hose: Fighting Niko is an honor to me, not sure how it will affect me until it happens.

Pro MMA Now: Every one of your wins have come by knockout and Falaniko is known for his submissions. Do you think he will try to stand and strike with you, and if it does go to the ground, how will you deal with that aspect of his game?

Kala Hose: I think Niko will start standing and exchange with me until he gets caught or start tiring, if he takes me down I have to keep moving and get back to my feet.

Pro MMA Now: What would a win over Falaniko Vitale mean to you personally and professionally for your career?

Kala Hose: A win over Niko will mean a lot to me and my career. It will bring me back under the spotlight again since I’ve been out for a while, and open the doors again.

Pro MMA Now: Thanks so much Kala for talking with us. I wish you the best of luck this weekend. Would you like to send any shout-outs, thank any sponsors or say anything to your fans?

Kala Hose: I would like to thank my family, friends, teammates and everyone who has helped me for this upcoming fight in any way. Mahalo.

2 thoughts on “Heroes of Hawaii: 10 questions with Kala “Kolohe” Hose – a ProMMAnow.com exclusive”