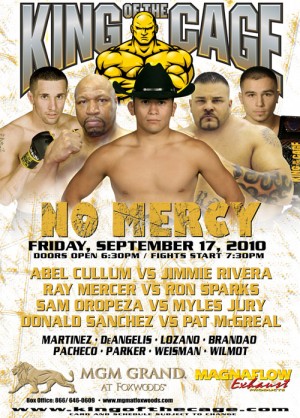 Mashantucket, CT. – September 7, 2010 – King of the Cage (KOTC), a popular mixed martial arts fight promotion company, is proud to present KOTC “No Mercy”, the promotion’s first, live, televised event on  the East Coast.  The nine bout fight card is stacked with compelling match-ups and A-list contenders, including some of New England’s top MMA talent. KOTC “No Mercy” will take place on Friday, September, 17th at MGM Grand at Foxwoods Casino in Mashantucket, Connecticut. The fights will air live on HDNet at 10:00pm ET.

In the main event of the evening the coveted KOTC bantamweight title is on the line. The fight promotion’s reigning champion Abel “The Silent Assassin” Cullum will step into the cage to defend his title for the fifth time. Standing in his way is a highly skilled, well-rounded fighter, by the name of Jimmie Rivera . In the co-main event, Olympic champion and former WBO World Heavyweight boxing Champion Ray Mercer will face off with heavyweight sensation Ron “The Monster” Sparks.

According to Keith Creed of King of the Cage, “We are very excited to host our first event on the east coast. New England fans will not be disappointed. King of the Cage is MMA at its best!  The “No Mercy” fight card is stacked with top contenders. Fans can expect a night of non-stop MMA action!”

Creed went on to say, “MMA fans in the northeast are in for a real treat! Our co-main event features Ray Mercer, who is coming off of a very impressive win over former UFC Heavyweight Champion Tim Sylvia. Mercer, who defeated Silvia 9 seconds into round 1 via brutal KO, will face knock out artist Ron “The Monster” Sparks. Sparks has KO’d four of the last five men that were brave enough to step into the cage with him!”

Cullum (18-3), a submission specialist fighting out of New Mexico, has successfully retained the KOTC bantamweight championship title for over two years. The EliteXC and DREAM veteran claimed the title in May of 2008, with a first round submission victory over Ryan Diaz, and has since defended his title four times.  Cullum will now face Jimmie Rivera (6-1), a Team Tiger Schulmann fighter and Bellator Fighting Championships veteran. He is currently riding a five fight win streak and has not lost a bout since 2008.  Rivera is determined to dethrone Cullum and claim the KOTC Bantamweight Title. Cullum is confident that he will continue his reign. Who will raise their hand at the end of the night? Fight fans will find out on September 17th!

*Card and Schedule Subject to Change

KOTC “No Mercy” will take place on Friday, September 17 at the MGM Grand at Foxwoods Casino in Mashantucket, Connecticut.  Doors open at 6:30pm ET. Fights start at 7:30pm ET. Fights will air live on HDNet at 10:00pm ET. Tickets are on sale now! To purchase event tickets log on to www.mgmatfoxwoods.com/kotc.aspx or visit the Foxwoods Casino box office.

The official KOTC “No Mercy” weigh-in event will take place on Thursday, September 16, from 4:00pm to 7:00pm at Foxwoods MGM Grand Ballroom. The weigh-in event is open to the public and free to attend. Fans can expect an MMA fan fest atmosphere featuring KOTC fighters and notable industry vendors. For more information on King of the Cage, please visit www.kingofthecage.com.