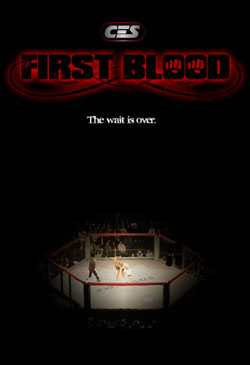 “Fighting is fighting and we know what fans want – fast action, entertainment and competitive matches,” CES president Jimmy Burchfield said. “We’re taking the same grassroots promoting and marketing plan we’ve used so successfully for many years in boxing and taking it into MMA. I’ve been studying MMA for nearly three years in order to learn how to build the best team possible. Boxing plays a big part in MMA. Some athletic boxers want to try MMA, some powerful-punching strikers want to box. CES is now in the unique position to offer boxers and MMA fighters opportunities to cross over.

“Our goal is to develop MMA fighters and help bring them to the top of the mountain – UFC. We have a good relationship with UFC Vice President of Regulatory Affairs, Mark Ratner, from when he was Executive Director of the Nevada State Athletic Commission. We believe our first show has the potential to be the best show ever in New England in terms of showcasing New England talent. We will have some of the best in action on ‘First Blood.’ We’re thrilled to be having this great show at our home base in beautiful Twin River.”

(Twin River has waived its 18+ rule for “First Blood.” Anybody under the age of 18 must be accompanied at all times by an adult and they must enter through the West entrance.)

Mike Campbell: “To be part of the first MMA show in Rhode Island, I’m so excited to be part of it. I have goose-bumps right now….honestly. I’m gonna bring it; I never give boring shows. I promise you’re going to see fireworks. We bleed and sweat together and it’s my honor to fighting on this card with these fighters. It’s going to be war.”

Mat Santos: “I was on the very first card in Rhode Island. They called it Vale Tudo. There wasn’t a law against it but it was legal, 11 years ago. I was in the Army in 1993 when I saw my first MMA fight. It looked like fun and that’s why it went from a hobby to my lifeblood. I train six days a week, every week, whether I have a fight or not. I haven’t fought in four years, not necessarily because of lack of trying. This is the fifth fight set-up for me but opponents pulled out. Anybody that hits the ground against me, I’ll finish them. I’m 100-percent confident that I will submit him. There’s nobody out there I don’t have an answer for. This isn’t going to be a boring Jiu-Jitsu fight. If I can’t take him down, I’ll beat him on my feet. The past 11 years I’ve fought all over in rings, cages and even open mats, but now I’m finally fighting at home.”

Saul Almeida: I haven’t fought in a while. I just came back from training two months in California with some of the best MMA fighters in the world like Anderson Silva. It’s going to be a really entertaining fight. You won’t want to miss it.”

Lionel Young: “I’m still a baby at this – I’ve only been doing it for a year. This is my biggest fight. I promise to go into the cage and give every ounce in my body.”

Luis Felix: I’m excited to be fighting here in my backyard. It’s something I’ve looked forward to ever since I got into MMA. September 17th I’ll be here to fight. I don’t go into any fight hating my opponent. This is a sport and I love to do it. After the fight we can be friends. I’m willing to put everything on the line. This is my ultimate challenge. I look forward to putting on a good show.”

Joe Dechaves: “It’s an awesome time – Rhode Island history – to be fighting on this card. Felix is a good fighter. I’ve seen some of his fights. I’ve been training hard and I’ll be ready September 17th. It’s a special fight for me. I’m dedicating it to my father who died in July, on my wedding day, so this fight means more to be than anything.”