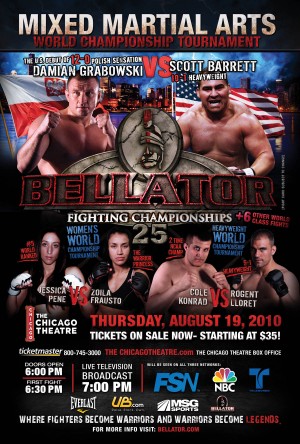 Also, an opening round in the women’s tournament featuring Zoila Frausto vs. Jessica Pene will take place, as well as a welterweight fight between Dan Hornbuckle and “Bad” Brad Blackburn.

Bellator uses their preliminary cards to showcase local talent in whatever city they happen to be in on a particular night. With Bellator 25 taking place in Chicago, it is highly appropriate for the preliminary card main event to feature none other than Chicago’s very own “Mr. International” Shonie Carter.

Carter will be looking for his 50th professional victory on Thursday night as he takes on Torrance Taylor. Now 38-years-old, Carter has been fighting consistently since his pro debut in 1997.

This will be Carter’s fifth fight so far this year. And although he no longer competes at the highest level, he is still loved by fans around the world and will go down in history as one of MMA’s most unique and endearing characters.