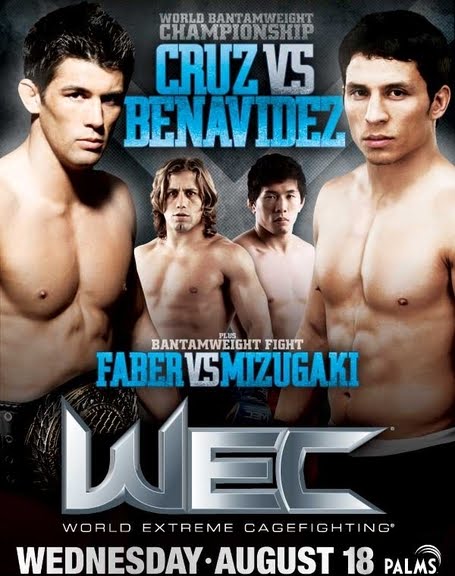 The little blue Octagon returns for WEC 50. The card, which will air live on Versus tonight, will feature a WEC bantamweight championship match as well as several quality WEC prospects including Shane Roller, Anthony Pettis and Chad Mendes.

WEC Bantamweight Championship Match
Dominick Cruz (15-1) vs. Joseph Benavidez (12-1)
Normally when one fighter dominates a fight as well as Cruz did against Benavidez, picking the winner in the rematch is a no brainer. However, Cruz used his superior reach and knee pick takedowns to win the fight. Both of these aspects are things that Benavidez can gameplan for and overcome. Benavidez has visibly grown in his two fights since the loss, and will come out with a plan for success.
Pick = Joseph Benavidez

Anthony Pettis (11-1) vs. Shane Roller (8-2)
Like most of Roller’s opponents, Pettis will be the more dynamic fighter. His striking game is both effective and flashy. He also once knocked out an opponent with a broken arm. However, Pettis has very little ability to stop takedowns. Roller will have very little trouble getting the fight to the floor, and he showed an improved submission game against Anthony Njokuani.
Pick = Shane Roller

Chad Mendes (7-0) vs. Cub Swanson (14-3)
There is a lot of hype for a reason. People have been talking up Mendes basically since his MMA debut. Against Swanson he should not have very much trouble getting takedowns and working some top game. The real question in this fight is, will Mendes take the next step forward and finish a quality featherweight?
Pick = Chad Mendes

Scott Jorgensen (10-3) vs. Brad Pickett (19-4)
Pickett has found new life in the bantamweight division. However, Jorgensen is one of the brightest stars in the division. Since dropping a questionable decision to Antonio Banuelos, Jorgensen has been basically unstoppable. Look for him to control the fight with his wrestling and work his front headlock submission series.
Pick = Scott Jorgensen

Bart Palaszewski (34-13) vs. Zack Micklewright (7-0)
This should be an old fashion striking match. Both fighters like to come out and throw. However, Palaszewski has shown that he is extremely vulnerable in the other aspects of the game. Micklewright has a more well-rounded game and will ride it to a win.
Pick = Zack Micklewright

Javier Vazquez (14-4) vs. Mackens Semerzier (5-1)
If you put aside the way Semerzier burst onto the WEC scene, Vazquez should be able to win this one with his grappling game. There is always a chance that Vazquez gets pulled into a striking game. However, in this fight he should be able to get takedowns and work his top game.
Pick = Javier Vazquez

Anthony Njokuani (12-3) vs. Maciej Jewtuszko (7-0)
Jewtuszko has become a star on the budding Polish MMA scene. His three submission wins, including one by heel hook, make him a serious threat in this fight. Njokuani has worked hard on his grappling, but it is not the easiet thing to pick up. Expect Jetuszko to pick up an upset win by submission.
Pick = Maciej Jewtuszko

Dave Jansen (14-1) vs. Ricardo Lamas (8-1)
This is a strangely difficult fight to predict. Jansen uses a single-minded game plan to work over fighters with his wrestling game. In his last fight, everyone saw what happens when Jansen is not able to get takedowns. Lamas has also show a good wrestling base. Look for the winner of the takedown game to take the fight. Jansen’s experience and dedicated game plan make him the favorite.
Pick = Dave Jansen

Fredson Paixao (9-3) vs. Bryan Caraway (12-4)
Caraway mostly relies on his grappling game when taking on quality fighters. That will get him into trouble here, because Paixao is the superior grappler. Look for Paixao to dominate a ground battle en route to a late submission victory.
Pick = Fredson Paixao

Danny Castillo (8-3) vs. Dustin Poirier (7-0)
Castillo should be able to keep this fight on the feet and outstrike Poirier. Although he is undefeated, Poirier has not faced the level of competition he will face in WEC.
Pick = Danny Castillo