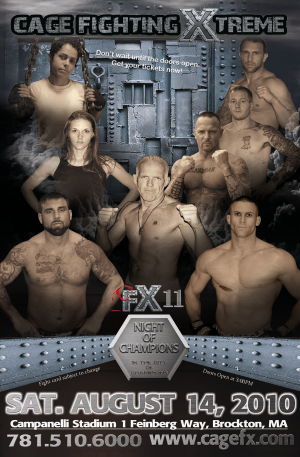 BROCKTON, MA – August 8, 2010 – CageFX, the largest mixed martial arts organization in the Northeast, today announces that it will be presenting one of the largest MMA events in New England history on Saturday, August 14, 2010 at 3:00 p.m. at Campanelli Stadium in Brockton, MA. The ‘Night of Champions’ event will bring 16 amateurs fights, a dozen professional fights (fight card subject to change) of combined mixed martial arts, with an everyday attitude toward a growing lifestyle that will give every one a hard adrenaline pump. The night will include 15 vendors, a car show, tattoo contests and live
band performances.

“This show offers something for everyone. All ages are welcome,” says Linda Shields, MMA Promoter. “We are very excited to bring our fans, for the first time ever, a car show, a pro and amateur fight card, live band and tattoo contest all in one location for all day action and for only one ticket.”

The night will draw in over 10,000 fans to watch the action packed, well-matched bouts, which demonstrate the battle of spirit, discipline, honor and the end of the envelope for the human body. Celebrities, rock stars, and media icons will be in attendance to help make the theme a reality and the best all-encompassing experience anyone could ever ask for. MMA promoter Linda Shields has been the powerhouse behind CageFX, in which Shields was recognized as “Woman of the Year” by Action Martial Arts magazine.