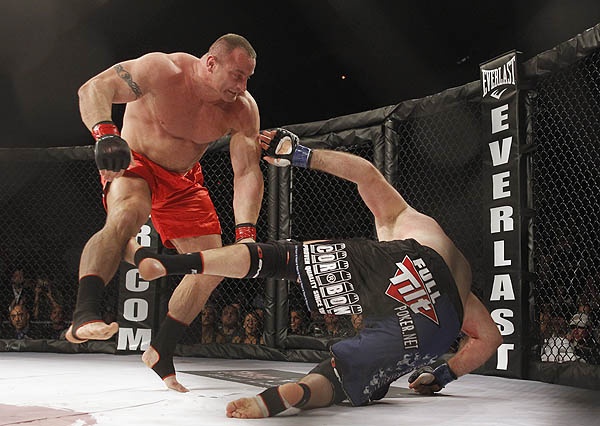 The bout between the two heavyweights appeared imminent after Esch verbally critiqued Pudzianowski’s performance against Tim Sylvia at Moosin God of Martial Arts.

Pudzianowski came into his bout with the former UFC heavyweight champion with only two professional wins under his belt. The muscle man easily defeated former boxer Marcin Najman in his debut. Then on May 7, he took a controversial two-round decision over Deep Megaton GP champion Yusuke Kawaguchi. Against Sylvia, Pudzianowski was clearly in deeper waters and submitted to punches early in the second round.

Prior to fighting MMA, Pudzianowski made a name for himself in the World’s Strongest Man competition. He won five titles, which is a record.

Th 44-year-old “Butterbean” is a veteran of 89 boxing matches and holds a 77-8-4 record in the sport. He began mixing in a little MMA in 2003. In his first bout, the super heavyweight was easily submitted by lightweight Genki Sudo. However, since then, he has scored some impressive victories over UFC veteran Wesley “Cabbage” Correira and Pride veteran James Thompson. In his last MMA bout, he submitted to punches from Jeffery Kugel in March.

Last Week, ProMMANow.com reported that KSW was in talks with Aleksander Emelianenko for a potential fight with Pudzianowski. Perhaps that will be the strongman’s next fight after “Butterbean.” Pudzianowski is also pencilled in to fight on Moosin’s second card on Oct. 9 in Chicago.

Update* – KSW promoter Maciej Kawulski announced of Polsat News that Aleksander Emelianenko will not fight for the promotion, because he has Hepatitis C. Rumors have circled around Emelianenko since he was disqualifed by the California State Athletic Commission before an Affliction show last year.

2 thoughts on ““Butterbean” vs. Pudzianowski to headline KSW 14 (updated)”