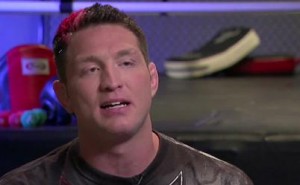 See the comments that sparked a war of words between “Mayhem” and Nick Diaz
Friday, July 30 at 10:00 p.m. on HDNet

DALLAS (July 29, 2010) This past week HDNet posted a clip from the upcoming program “The Voice vs. ‘Mayhem’ Miller” – and that clip has attracted over 45,000 views on YouTube. Not surprising given the fact that Jason “Mayhem” Miller makes some bold comments about Nick Diaz (and a range of other topics) during the interview, set to air this coming Friday on HDNet.

Miller has some surprising answers for Schiavello on subjects such as who gave him the hardest hit in his career and which A-list celebrities he would choose to hook up with now that he has achieved a level of celebrity himself. But, the most talked about piece of his interview with “The Voice” centers around his feelings about another Strikeforce fighter – Nick Diaz.

Miller said of Diaz, “He’s highlighting this stupid, thug culture that we really need to get rid of,” says Mayhem on HDNET. “I want to beat him up. It’s all business, but I want to kick him in the face.”

The animosity stems from Miller’s view that Diaz “jumped me on national TV” during the Strikeforce brawl in Nashville in April. The raw emotion generated in this HDNet Special can be seen in the following preview clip:

Diaz responded to Miller’s comments by hosting his own obscenity-laden posting, also on YouTube.

“This interview with Mayhem Miller is ‘The Voice’ at his finest,” says Andrew Simon, CEO of HDNet Fights. “Schiavello has a knack of getting very real responses from his guests through very unique methods. Behind the outlandish humor in the show are some very powerful and emotional moments, especially when it comes to Miller talking about Diaz and the brawl in Nashville.”

Michael Schiavello, known as “The Voice,” is one of the world’s leading combat sport broadcasters thanks to his trademark mix of entertaining one-liners and unparalleled understanding of MMA. Schiavello currently serves as the global voice of K-1, K-1 MAX, DREAM, and Mark Burnett’s The Contender Asia. In 2008 he was part of the global ABU broadcast of the Olympic Games from Beijing, and is the long time voice of FOX Sports kickboxing, muay thai, and MMA in Australia.

“The Voice Vs…” is HDNet’s 60-minute one-on-one interview program hosted by Michael Schiavello featuring revealing conversations with the top stars in and around the world of mixed martial arts.