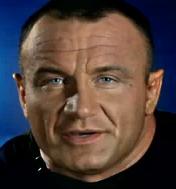 Moosin officials believe Pudzianowski has tremendous potential and that he should be featured on Moosin’s proposed October 9 show in Chicago. Mariusz, who has reportedly been training hard in his native Poland to develop his MMA skills, will arrive in Massachusetts by the end of July to begin training with former boxer “Irish” Micky Ward, as well as two former All-America wrestlers, in order to learn the basics of boxing and wrestling to improve his overall MMA game.

However, based on Pudzianowki’s second-round loss by submission to former 2-time UFC heavyweight champion Tim Sylvia this past May  in Worcester, Massachusetts, “Butterbean” doesn’t think Mariusz deserves to be showcased again on a Moosin pay-per-view event, at least not until he proves himself in the cage.

“I know he allegedly broke his foot in the fight against Sylvia,” Butterbean criticized Pudzianowski, “but he didn’t show anything before he quit. Pudzianowski has no stand-up and as strong as he is, he punches like a girl. All he does is throw arm punches. He needs a lot of help. He’s the 5-time World’s Strongest Man but hits like a 130-pounder, not a strong man who weighs 270 pounds. He doesn’t have the skill level to get to the level he wants to fight.

“Once he gets a stand-up game – you can’t have a ground game working without one – he could be a force in MMA. He still needs some work on his ground game, too. We all know he’s very strong but that’s not enough at the highest level of MMA. I don’t know who has been coaching him but that trainer should be fired. Pudzianowski needs to prove himself, showing he has a good stand-up game by beating a good MMA fighter, before he gets another big fight like a spot on the October 9th show.”

Moosin, based in South Korea-based, has promoted MMA shows in South Korea and the United States and, in conjunction with the International Taekwon-Do Federation, plans expansion into to China, Poland and Australia.

Moosin: A global event promoter based out of Seoul, South Korea, in conjunction with the International Taekwon-Do Federation, Moosin is known for bringing fans the finest in mixed martial arts competition. Moosin is revolutionizing the MMA industry by merging an international roster of talented fighters with recognizable stars from the world or music, sports and popular culture. Moosin pits warrior against warrior, featuring a hybrid of MMA and hard-hitting Moosin-style kickboxing, in hand-to-hand battles of skill, honor and art.